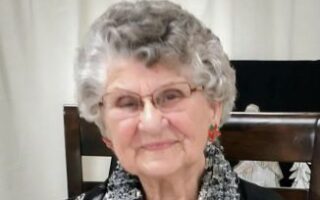 Funeral Mass will be held at the St. Mary’s Catholic Church-Sleepy Eye, on Monday, January 23, 2023 at 10:30 am. Service can be watched at https://www.facebook.com/stmarysleepyeye/live

The clergy will be Fr. Mark Steffl. Interment will be at the St. Mary’s Catholic Cemetery in Sleepy Eye.

Barbara Leona Mages, 93 from Sleepy Eye, Minnesota, entered God’s waiting arms on January 5, 2023, at her home in Mesa, Arizona just in time to help Alphonse celebrate his heavenly birthday. With Alphonse were her children Robert, Mary Beth and Duane and many family members rejoicing when Barbara got her angel wings.

Barbara was born to Alois and Barbara (Kojetin) Kodet on May 29, 1929, in Henryville Township, Minnesota. She grew up on a farm close to a Czech community called Bechyn.
Barbara married Alphonse L. Mages at St. Mary’s Catholic Church in Bechyn, Minnesota, on October 29, 1946, which happened to be her dad and mom’s wedding anniversary. Barbara told her children that she only had two wedding dresses to pick from as it was shortly after World War II. It was October so she chose the one with long sleeves.

Barbara worked beside Alphonse for 18 years on the Morton farm before moving to their “dream farm” north of Sleepy Eye. They remained there until they retired and moved to New Ulm and then eventually back to Sleepy Eye in 2006. In all of their years of farming they raised dairy cows, beef cattle, hogs, and chickens plus field crops. Barbara’s garden was huge with every vegetable and flower that could be grown in Minnesota. The basement shelves were lined with extensive half gallon and quart jars of canning as well as a freezer full of her garden produce. It was not unusual to put up 100 chickens several times during the summer with the help of her children.

Barbara decided one January to keep track of just her bread making. For one month she baked over 110 loaves of bread, not counting the cinnamon rolls, fried bread dough, rolls, and buns. She said she didn’t want to know beyond that. She always made her bread from scratch without a recipe.

Barbara and Alphonse loved to dance. They were a pleasure to watch on the dance floor especially to “old time” and country music. Barbara wrote the words to a song, “Bless My Soul,” for Alphonse’s funeral. Barbara played the guitar in her teen years but put it down to raise her family. When she was in her eighties, she learned to play again. Her last performance singing and speaking was at St. Philip’s Catholic Church in Litchfield, Minnesota at “Ladies Night Out” on December 1, 2022.

Barbara had many accomplishments that she accepted so humbly. She was the author of three books. The first book was called “To Bechyn and Back.” The second book was called “Dandelion Salad.” The third book was called “Golden Acres” named after the Sleepy Eye farm. Her books centered around her growing up year during the Depression and World War II, meeting Alphonse, and raising a large family.
Barbara started making rosaries for the missions when she lived at Morton, and she was still making them at the time of her death. The rosaries started as simple string and plastic beads to beautiful crystal and glass beads that were works of art. Over her lifetime, thousands of rosaries have been sent to the missions and many hundreds to family and friends.
Perhaps Barbara’s greatest accomplishment was raising such a large family. Barbara was a very gentle and patient mother and a great advice giver when you asked her. She was a strong “Pro Life” supporter and accepted all her children from God with loving and open arms.

It was amazing to watch television with Barbara, especially “Jeopardy” as she could give the questions to all the answers.

Barbara was a member of the National Catholic Society of Foresters over sixty years, serving most of those years as President or Treasurer and/or a delegate to their conventions held all over the United States. When Alphonse was alive, they traveled to these conventions together and Alphonse enjoyed them just as much as Barbara did. Barbara was a past member of St. John’s Alter Society in Morton, MN and the Paxton Township Birthday Club. When she moved to Sleepy Eye, she belonged to the Christian Mothers at St. Mary’s Catholic Church and the Council of Catholic Women. She was a member of St. Rita’s Study Club. For many years, she made quilts to be auctioned off as a fundraiser for St. Mary’s Church. She never missed a year helping to pack bags of food for Food For Kidz.

Barbara loved Sudoku, crossword puzzles, jigsaw puzzles, “Duane’s game,” and playing cards. She loved any card game but especially Hand and Foot. She was extremely hard to beat, and her children tried to figure out her strategy, but she will have to let them know her secret when they get to Heaven. She was an accomplished seamstress. When her daughters were still at home and a catalog came with all the cute dresses, they would show a dress they liked to her, and she would make her own pattern and sew it for them, and it looked just like the one in the catalog.
Barbara was one of the founders of a family scholarship fund called “Forever Young-The Alphonse and Barbara Mages Scholarship.” This scholarship offers educational scholarships to her grandchildren and great-grandchildren. These scholarships are given out each year at our annual summer get together called “Magesfest.”