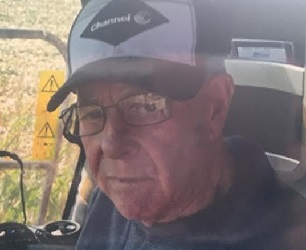 Arnold Kenneth Knott was born on August 1, 1933 in Browns Creek Township near Red Lake Falls, MN to parents John and Anna (Zins) Knott. In 1939 he moved from Red Lake Falls to a farm southeast of Lucan. In 1952 he moved to a farm east of Wabasso. He graduated from Wabasso High School. On November 8, 1952 he married Bernadine Manderscheid at St. Anne’s Catholic Church in Wabasso. They settled on a farm in New Avon Township East of Wabasso. Arnold was a farmer all of his life and his love of farming and living in the country was his greatest joy. He was a member of the Wabasso Rod & Gun Club, NFO, Wabasso Lions, Knights of Columbus, Groundswell Toy Project. He was a member of St Anne’s Catholic Church since 1952. His hobbies were hunting, fishing, farming, playing cards, and he particularly enjoyed the many fishing trips to Canada. He was known to start his own tomato plants and always wanted to be the first one to have a ripe tomato.

Arnold died on Tuesday, February 8, 2022, on the family farm surrounded by family.

In lieu of flowers please give a memorial to the St Anne’s School in Wabasso.