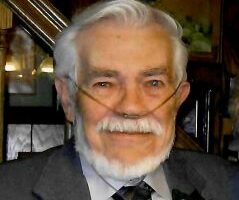 Ardell Ertwin Tepfer, age 82 of Danube, went to be with his Heavenly Father on Thursday, December 8, 2022, at the Olivia Hospital.  A funeral service will be held on Monday, December 12th, 2022 at 10:30 am at St. Matthew’s Lutheran Church in Danube, MN. The Rev. Darren Green will officiate.  Burial will be in the church cemetery south of Danube. Visitation will also be held at St. Matthew’s one hour prior to the service, and on Sunday, December 11th, from 5:30 – 7:30pm.  Arrangements are with Dirks-Blem Funeral Service.

Ardell was born on April 2nd, 1940, to Herbert Wayne Tepfer and Cora Wilhelmina (Gens) Tepfer, on the family farm in Crooks Township, Renville County, Minnesota, where he lived for the next 79 years, until he moved to Danube in 2019.  He was baptized and confirmed in St. Matthew’s Lutheran Church in Danube, Minnesota, where he was a lifetime member. He graduated high school from Danube High School in 1958.  Ardell was united in marriage to Kathleen LuAnn Zuidema on September 22, 1961.  Together, they raised their four children, David, Sandra, Debra, and Angela, along with Monique Lammers who joined the family as an exchange student in 1981.

Ardell was a farmer his entire life. He loved every aspect of it, from the draft horses of his childhood to the modern day equipment of his later years and finally circling back to hosting old-time threshing bees for his family. Ardell was a natural born civic leader, serving on many boards throughout his lifetime including school board, insurance board, and many others. The service that was most important to Ardell was to serve the Lord in many capacities at St. Matthew’s, where he served on church council and multiple other committees and projects.  Ardell loved to serve the Lord through music, sharing his talent as a soloist at weddings and funerals and singing in various choirs.  His family will always remember his resonating bass voice singing hymns in the balcony on Sunday mornings, and Christmas carols by the fireplace at home.

Family was a precious treasure to Ardell. As the family grew through the years he loved spending time with them in various stages of his life, including snowmobiling up north and camper traveling in the west with his children and tractor rides and playing board games with the grandkids.  Ardell was an infamous story teller with an encyclopedic memory for dates and details which he shared with his family and expanded into elaborate research and documentation of family history dating back centuries. The most important information he wanted to pass on to his family, up until his final hours, was his complete faith and trust in the Lord.

He was preceded in death by his parents, sister Marion Ludford and infant brother Stanley.

In lieu of flowers, donations can be made to Little Lambs Learning Center or St. Matthew’s Lutheran Church.