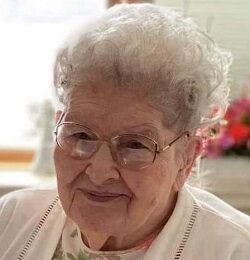 Funeral Service will be held at the St. Mary’s Catholic Church, Sleepy Eye, on Monday, March 14, 2022 at Noon.

Visitation will be on Monday from 10:00 am to Noon at the church.

A time of fellowship will be held in the church social room following the service.

Interment will be at the New Ulm Catholic Cemetery following the luncheon.

Annette Evelyn (Bassett) was born to Kathryn (Greiner) Bassett in Comfrey, MN on March 21, 1922. She attended St Paul’s Catholic School through 8th Grade when the family moved to New Ulm. She then attended New Ulm Public School, graduating in 1940. On August 31, 1940 she married Arden Frederickson at St. Mary’s Rectory in New Ulm. After their marriage they lived a few years in New Ulm, and then moved the family to Sleepy Eye. To this union 6 children were born. On January 13, 1951 Arden was killed in a small plane crash, leaving Annette to raise the children alone, the youngest of which was born the month following his death. During these years Annette, was a waitress at the Delroy Hotel and Dining Room. While working there, Annette met Neil Johnson of Godahl. After a courtship they married March 18, 1967, and Annette became a farm wife. Annette loved the country life and had large gardens, both vegetable and flowers. She loved gardening, canning, and crossword puzzles but her passion was doing embroidery. She made personalized baby quilts for each grandchild, and most of her great grandchildren. She was a prolific letter writer and made lifelong friends as pen-pals, which she corresponded with even in her 99th year. All these filled many hours, but Annette was happiest spending time with her children and their families. Annette was preceded in death by her mother Kathryn Bassett, her husbands, Arden Frederickson and Neil Johnson, her in-laws Hjalmer and Anna Frederickson, Lars and Dorothea Johnson, her sons, Jon, James (Linda) and Bruce Frederickson, siblings, Loretta (Conrad) Wetzel, Joseph, Kathryn, Jerome (Elaine) Bassett, Sylvia (Harold) Chase, Joyce (Orville) Steinberg, Kenneth (Dolly) Bassett, Patrick Bassett and Patricia (Raymond) Schnobrich, in-laws, Carol and Norbert Kastner, Howard and Lucille Frederickson, Mary Jane (Kenneth) Benson, Donna (Kent) Skarpohl and Roger Frederickson, as well as Leonard, Hazel and Norma Johnson, Ethel (Jack) Greeley, Marceil (Reuben) Ingvalson, and Delores (Roger) Lundgren. She is survived by her daughters, Brenda (Michael) Walden, Karen (Kenneth) Schaefer and Karolyn Marks, daughter in law, Patricia Frederickson. 9 grandchildren, Tina (Don Eitel) James (Missy) Frederickson, Jon (Melissa) Walden, Barbie (Dan) Gruenhagen, Chad (Sarah) Schaefer, Michelle Rathmann, Nathan (Cassandra) Schaefer, Brian (Katie) Marks, Kathy Marks, 6 step grandchildren, Chaz Hernandez, Kenny and Mark Flores, Nicole (Scott) Steiner, Amy (George) Grossam, and Chad Marks as well as 29 great grandchildren and many other relatives