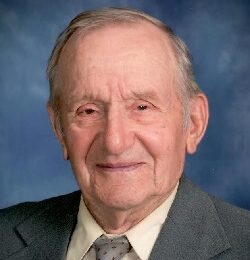 Mass of Christian Burial for Alois “Al” Brey, 96, of Wabasso, will be Tuesday, April 19, 2022, at 2:00 p.m. at St. Anne’s Catholic Church in Wabasso. A livestream and recording of the service will be available at www.lowafc.org. Visitation will be one hour prior to the church. Interment with military honors will follow at St. Anne’s Catholic Cemetery.

Alois “Al” John Brey was born on April 28, 1925, in Wabasso, to Frank and Elizabeth (Daub) Brey. He grew up in Wabasso and graduated from Wabasso schools. In August 1943, Al entered Navy Flight Training Program, where he attained the rank of LTJG. He was mustered out in October 1945, after which he attended two years at the University of Minnesota and began farming in 1952. In November 1959, Al was united in marriage to Fern Kramer Mahal at St. Anne’s Catholic Church in Wabasso. He was a lifelong resident of Wabasso, and he was active in his community. He was a member of the American Legion, Lions Club, Catholic Order of Foresters, and Redwood Soil and Water Conservation. He enjoyed visiting with people at the meal site and delivering Meals on Wheels. For many years, he planted trees and hung flags around town. Al loved the outdoors, including taking care of his grove by chopping wood and making fires. He took trips to Montana and Canada to go hunting and fishing. He aimed to be self-sufficient, and in later years he made wine and canned vegetables from the garden. Al desired to keep his independence as long as possible, and he was service-oriented to the end.

Alois died on Monday, April 11, 2022, at his residence in Wabasso. He is survived by his children Connie, John, Kathy, Kitty, Mary, Vicki, Bill, JoAnn, Ruth, and Phyllis; 25 grandchildren and 25 great-grandchildren; sisters Theresa Haddy and Justine DuBruil; and many nieces, nephews, relatives, and friends. He was preceded in death by his parents, wife Fern, son Joe, sisters Ann Katherine Brey and Virginia Osterbauer, and brother Paul Brey.