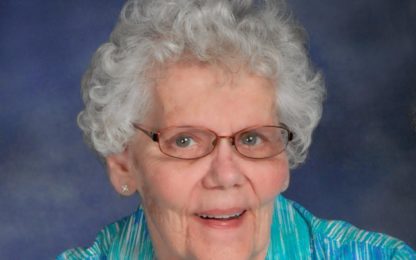 Alice Marie Osland, age 79 of rural Lamberton, passed away unexpectedly Tuesday, June 2, 2020 at her home.  Memorial Services will be held at 1:00 p.m. Saturday, June 6 at the Osland family farm, 26600 Co Rd 21 in Lamberton. Please bring your own chairs.  Online condolences may be sent at www.stephensfuneralservice.com.  Stephens Funeral Service – Westbrook Funeral Home is assisting the family with arrangements.

Alice Marie Osland was born July 18, 1940 to Otto and Dorthea (Schultz) Rath in on the family farm near Buffalo Lake, Minnesota.  She was baptized and confirmed at the Zion Lutheran Church in Buffalo Lake.  She graduated from the Buffalo Lake High School in 1958.  Alice furthered her education at the New Ulm School of Practical Nursing and graduated in 1959.  On November 20, 1959, Alice was united in marriage to Myren Osland at St. Olaf Lutheran Church in rural Walnut Grove.  This marriage was blessed with three children Milan, Dawn and Glen.  The family lived on a farm site south of Lamberton.  Later this marriage was dissolved.  In January 1961, Alice began her nursing career at the Westbrook Hospital and Peterson Estates. She worked her entire career here caring for countless people for nearly 60 years, and retired on September 24, 2019.  Alice was a caring and compassionate nurse.  She loved caring for her vegetable and flower gardens.  Alice always wanted to be sure her family had plenty to eat.  She was an awesome cook and baker.  Alice was the queen of making Lefse and shared that tradition with her grandchildren.  She cherished the time spent with her family.  Blessed be her memory.