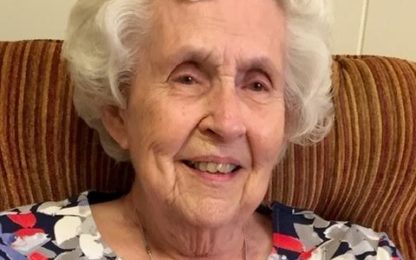 Alice M. Rude, 97, of Tufte Manor, Grand Forks, North Dakota, died Saturday, April 4, 2020, at the home of her daughter.   Graveside Services will be at Our Savior’s Cemetery at Sacred Heart, Minnesota.  Her grandchildren will serve as honorary Pallbearers.  Local arrangements are with Dirks-Blem Funeral Service, Renville, MN.

Alice Marion Sheimo, the daughter of Paul and Hulda (Lien) Sheimo was born in Granite Falls, Minnesota on November 12, 1922. She was baptized and confirmed at First Lutheran Church in Granite Falls.   She attended Granite Falls Public Schools, graduating in 1940.   She continued her education at Minneapolis Business College and worked for Minneapolis Iron Store Co. during WWII.  Alice married Orren H. Rude on December 2, 1945. They resided on a farm outside of Sacred Heart, Minnesota.  They were the parents of 5 children, Pauline, Joel, Marilyn, Jan, and Margaret.

She was an active member of Our Savior’s Lutheran Church, teaching Sunday school, singing in the church choir, and serving on the church council.  She was the first female member and chairperson of the Sacred Heart School Board and a Charter Member of the VFW Auxiliary. She loved to read, was an avid bridge player, and enjoyed traveling. Her traveling included trips to visit her children and several international trips including a trip to Normandy and places where Orren served during WWII.  Another passion for Alice was working on crossword puzzles.  Her claim to fame was working on the “World’s Largest Crossword Puzzle” which measured 7’ by 7, had 28,000 clues, and covered a whole kitchen wall.  Since her eyesight was failing, she enlisted the help of a group of friends who spent Saturday mornings over the course of several years to complete it.  KSTP TV’s Jason Davis made a trip to Sacred Heart to cover the story.  Alice will be remembered for her strong faith, ability to accept change, love of people and sense of humor.  One of her crossword related quips was that her final resting place would be 3 across and 6 down.

She was preceded in death by husband Orren, son Joel, and granddaughter Kari.