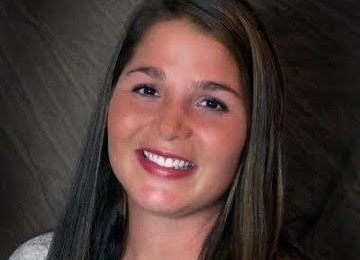 Nicole Rose (Steffl) Fuchs, age 37, of Sleepy Eye, Minnesota, joined God in Heaven on Monday, December 21, 2020, after a long and courageous battle with cancer, and is now at rest.

Covid-19 rules and regulations will be followed. Including the use of masks, social distancing and capacity limits.

The funeral will be livestreamed and can be found at   https://www.facebook.com/stmarysleepyeye/videos

In lieu of flowers, memorial donations may be made to Nicole Fuchs Scholarship Fund.

Nicole was born on April 26th, 1983, in Breckenridge, MN. She was adopted by her loving parents, Joe and Cindy (Kramer) Steffl, and raised on their family farm in Sleepy Eye, MN, along with her older brother, Justin, younger brother, Adam, and younger sister, Maria.
She was baptized and confirmed at St. Mary’s Catholic Church where she was also an active member. Nicole graduated from St. Mary’s Catholic School in 2001 and earned her Bachelor of Business Communication from Augustana College (now Augustana University) in Sioux Falls, SD, in 2005. After college, Nicole moved back to Sleepy Eye to work as co-owner of Starry Night Woodworking and as a self-employed farmer. On August 1st, 2014, at her childhood home and farmstead, Nicole was united in marriage with long-time love, Paul Fuchs, of Sleepy Eye. Together they raised two boys who were Nicole’s pride and joy – Brecken Hulke (age 12) and Corbin Fuchs (age 16 months).
Nothing about Nicole’s life or personality was ordinary. She was, from birth until death, extraordinary. Her 37 years were surrounded by loving family, including her birth parents and siblings with whom she was reunited at age 24 through pure chance. She took any opportunity to be outdoors – working on the farm (crops or livestock), playing sports, or simply cruising in the Gator, chasing the sunset. Her boys held her heart, and she is sure to forever be held in theirs.
Nicole is survived by her husband, Paul Fuchs, and two beloved sons Brecken and Corbin of Sleepy Eye; her parents Joe and Cindy (Kramer) Steffl of Sleepy Eye; brother Justin Steffl, his wife Beth and their daughter Lauren Steffl of Sleepy Eye; brother Adam Steffl (fiancé Kenneth LaBelle) of Hayward, WI; sister Maria Steffl of Richfield; in-laws Greg and Diane Fuchs of Sleepy Eye; Deanna Schwint of Sleepy Eye, Tony Fuchs of Sleepy Eye, and Andrea Forney of Pine Island, as well as many aunts, uncles, cousins, nieces and nephews.
Nicole will also be remembered with love by many other special people in her life, including her “Texas Family,” Lisa, David and Dylan Lott; Brian, Amy and Caleb Nold; Shirley and Oscar Lott; Monica Benning; And her “Michigan Family”, Dennis, Dana, Andrew, Trevor, Kara and Shane Nold; and countless life-long friends and teammates.
She was preceded in death by her paternal grandparents, Louis and Mary (Mangen) Steffl, as well as her maternal grandparents, Lawrence and Marjorie (Bellig) Kramer.