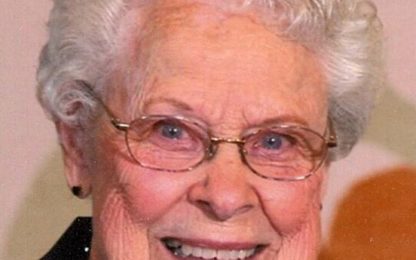 Myra Lindquist. Age 91, of Willmar and formerly Olivia, died Saturday, October 24, 2020 at Bethesda Grand in Willmar. A private family funeral will be held at Cross Of Calvary Lutheran Church in Olivia with Rev. Matt Hausken officiating. Burial is in the Olivia Cemetery. Arrangements are with Dirks-Blem Funeral Service of Olivia.

Myra Jane Lindquist was born January 8, 1929 at Buffalo Lake, MN, to Ferdinand and Helmina (Erlandson) Koenig. She grew up in Buffalo Lake and graduated from Buffalo Lake High School in 1946. During her high school years she was also employed by the local telephone company. Myra married Edwin Moje on July 20, 1946 and they were blessed with three children. The family lived at Roseland and Myra was a homemaker and assisted on the farm. Myra also worked with her father-in-law at Reep Hardware Store in Danube. After Edwin died in 1965 Myra worked as a Nurse’s Aid at the Renville County Hospital for short time. Myra married Wallace Lindquist on August 20, 1966 and they lived on his farm south of Olivia. Her family fondly remembers how she bought the first three wheel ATV that Honda made to run lunches out to Wally in the fields. Myra enjoyed doing embroidery, tending her flower garden, and was a faithful member of Cross of Calvary Lutheran Church. Myra and Wally had truly enjoyed spending more than 25 winters at Yuma, AZ. They had made their home in Willmar in later years and Wally died in 2013. Myra has been a resident of Bethesda Grand recently where she passed away Saturday evening, October 24, 2020.

Myra is survived by her family: Carol (and Jim) Denneson, Steve Moje, Mary (and Jeff) Skaalerud, Cheryl Victorino (and special friend Bob Ciari), and David (and Sue) Lindquist; her 12 grandchildren; and her 27 great-grandchildren. Myra was preceded in death by her husbands, Edwin and Wally; stepdaughter Lorna Bye; and her 13 siblings.