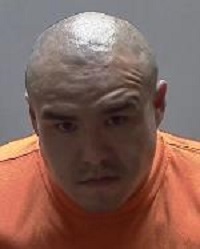 On Saturday, Aug. 29, at about 1:40 a.m., a Deputy Sheriff from the Renville County Sheriff’s Office attempted to stop a vehicle traveling northbound on Co Rd 5 near MN Hwy 19, in Franklin.  As the traffic stop was initiated, the suspect vehicle began to accelerate and flee at a high rate of speed.

The suspect vehicle led deputies through portions of Renville, Redwood, and Brown Counties, including through Franklin and Morgan, at speeds that at times exceeded 100 miles per hours.

Finally, a tire deflation device successfully deflated one or more of the suspect’s tires.  Shortly afterward, the driver slowed to a stop and surrendered along Sherwood Avenue, southeast of Morgan.  He was then taken into custody.

The driver was ultimately identified as Marcus D. Pendleton, age 34, from Morton.  In addition to the current offenses, Pendleton was wanted on a MN Department of Corrections arrest warrant. He was booked into the Renville County Jail and charged by the Renville County Attorney’s Office with two felonies: Fleeing a Peace Officer in a Motor Vehicle, and 1st Degree DWI. He was also charged with a gross misdemeanor: Driving After Cancellation.