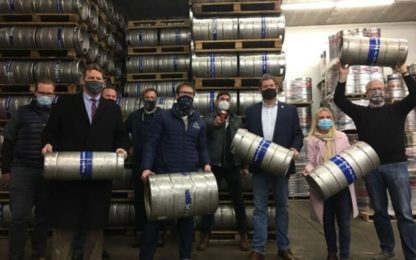 State lawmakers toured Schell’s Brewery in New Ulm on Friday as an alliance of Minnesota breweries called on the state to lift an antiquated law that puts a cap on growler sales.

Under current Minnesota law, breweries that produce 20,000 barrels of craft beer per year are restricted from growler sales.  That includes four breweries from the Alliance of Minnesota Craft Breweries: Schell’s, Fulton, Surly, and Castle Danger.

Kyle Marti, Vice President of Operations at Schell’s Brewery, said, “We just want to sit down and say ‘hey look, if you can have a taproom in Minnesota, you should be able to sell growlers.'”

Breweries that produce under 250,000 barrels can have a taproom.  Marti said the Alliance is seeking the same benchmark for growler sales.

It’s just staggering how arcane the liquor laws we have are,” said Minnesota House Representative Jim Nash from Carver County.  “It is penalizing success.”