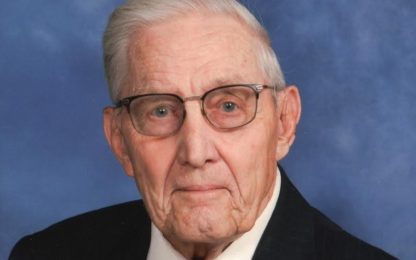 A private, family memorial service for Maurice Joel, 90, of Wood Lake, will be held at 11:00 a.m. on Thursday, August 13, 2020, at St. John’s Lutheran Church in Wood Lake.  Visitation will take place one hour prior to the service.  Interment with military honors will take place at the Vesta Community Cemetery.  Due to COVID-19, the service will be private, however, a recording will be available at www.sunsetfuneralassociation.com

Maurice Heber Joel was born on September 29, 1929, in Granite Falls to Ed and Edna (Rader) Joel.  He grew up in Wood Lake and graduated from Wood Lake High School.  Maurice enlisted and served in the U.S. Air Force from 1948 – 1949 and in the reserves until 1955.  On February 14, 1953, he was united in marriage to Bernell Werner.  The couple farmed and raised their family in Wood Lake.  They enjoyed camping and wintering in Arizona.  In his younger years, Maurice enjoyed hunting and fishing.  In his later years, he tended to Bernell with her failing health and he missed her dearly after her death.  He was a lifelong member of the U.S. American Legion.

Maurice died unexpectedly at his residence in Wood Lake on Saturday, August 8, 2020.  He is survived by children Charles (Nancy) Joel of Garvin and Michael (Vicki) Joel of Scottsbluff, NE; grandchildren Brian (Deana) Siekmann and Melanie Siekmann; great grandchildren Madelyn, Leo, Stanley and Traeh Siekmann, and brother Darrel (Gretchen) Joel of Rochester, MN.  He was preceded in death by his parents and wife, Bernell.