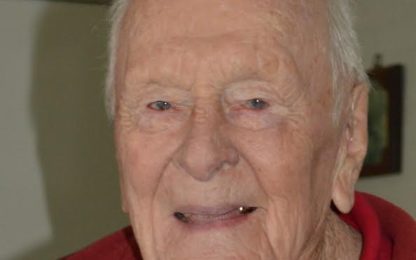 Maurice A. Katzenberger, age 95 of Redwood Falls, passed away Friday, July 31, 2020 at his home in Redwood Falls.  Memorial Services will be held at 2:00 p.m. Wednesday, August 12 at Redwood Valley Funeral Home in Redwood Falls.  Visitation will be one hour prior to the service at the funeral home.  Interment will be in the Fort Ripley Cemetery at a later date. Due to the current Covid-19 restrictions, GUESTS WILL BE REQUIRED TO WEAR A MASK and practice social distancing guidelines. A 50% indoor occupancy restriction will be maintained. Online condolences may be sent at www.stephensfuneralservice.com.  Stephens Funeral Service – Redwood Valley Funeral Home is assisting the family with arrangements.

Maurice Allen Katzenberger was born February 1, 1925 to Frank and Myrtle (Leuk) Katzenberger at their home near Seaforth, Minnesota. Maury attended school in Redwood Falls, Minnesota where he played football, basketball and baseball and everyone called him “Katzy.” He graduated from Redwood Falls High School in June 1943 and was enlisted in the United States Army on June 18, 1943. Maury completed his basic training at Camp Ellis in Illinois. On December 19, 1943, Maury shipped out for the island of Oahu, arriving there on Christmas Eve. Shortly after, he was sent to the island of Kauai where he spent two months in training. From there Maury was stationed on the Island of Tinian and briefly on the Island of Saipan (part of the Northern Marianna Islands). He was honorably discharged from the United States Army on January 15, 1946 at the rank of Sargent First Class. Maury began his working career as a mechanic for the Ford Garage when it was located in downtown Redwood Falls and worked for Redwood Motor Supply, where he retired as Store Manager. On April 25, 1948, Maury was united in marriage to Leona Marie Siegfried at the Church of Christ in Redwood Falls, Minnesota and they enjoyed 67 years together. Maury was a lifelong hunter and fisherman and he enjoyed many Canadian fishing trips with family and friends. He and Leona travelled extensively across the United States and especially enjoyed their trips to Alaska and Hawaii. Maury and Leona also spent their winters at Venture Out Retirement Community in Mesa, Arizona (23 years with Leona and 4 years on his own), where they developed many long-lasting friendships. Maury was a keen pool player and with his team, he enjoyed winning several championship tournaments. Maury was a 75 year member of the American Legion in Redwood Falls.