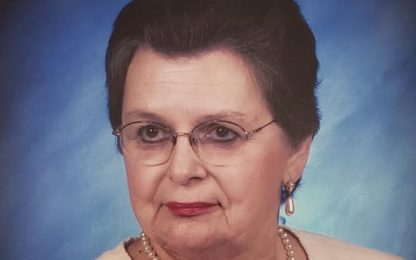 MaryAnne Bentley, age 84, of Danube died on Thursday, November 12, 2020 at RenVilla Nursing Home. A memorial service will be on Saturday, November 21, 2020 at 11 a.m. at Cross of Calvary Lutheran Church in Olivia with Rev. Matt Hausken officiating. Burial will be at a later date in the Olivia Cemetery. Visitation will be one hour prior to the service. In lieu of flowers, memorials are preferred to the family. Arrangements are with Dirks-Blem Funeral Service of Olivia.

MaryAnne Bentley was born on October 25, 1936 to Martin and Lucille (Prom) Ulmen in Mankato, MN. She graduated from Loyola Catholic School in Mankato in 1954, married in 1955, and started her family. Her family eventually moved to Renville and she was a full-time mom to her six children and later worked as a waitress. On May 24, 1980, MaryAnne was united in marriage to Lloyd Bentley at Faith United Methodist Church in Olivia. They lived in various places before settling in Danube. Lloyd and MaryAnne enjoyed traveling together. They became members of Cross of Calvary Church in Olivia and MaryAnne was active in her church with bible study, quilting and church Circle. MaryAnne was an avid reader, the Nancy Drew series was her favorite. She spent her time doing word searches, adult coloring books, and watching Animal Planet and rodeos on her TV. Charlie Pride was one of her favorite singers to listen to. Watching the numerous birds out her window gave her much joy. MaryAnne had an immeasurable love for her grandchildren and was so proud of all of her family. She moved to RenVilla in 2016, where she received great care from all of the staff. MaryAnne will be remembered for being a faithful prayer warrior, a giving person, and her caring heart (with a little bit of bossy thrown in).