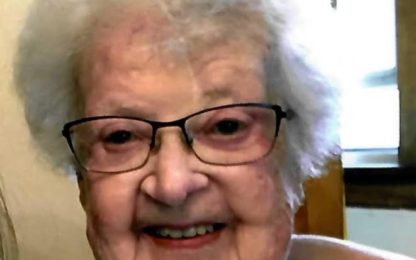 Mary Kathryn Dvorak was born on May 26, 1922, in Olivia, Minnesota to Anthony and Rose (Quinn) Halligan.  She grew up in the Olivia area and graduated from Olivia High School in 1940.  After working at Breezy Point Resort in Brainerd for a year, she became a Dental Assistant/Hygienist for Dr. Anthony Kubache of Olivia, and worked there until her marriage.  She was united in marriage to Jim Dvorak, Jr on Renville on July 7, 1947, at St. Mary’s Catholic Church in Willmar. Jim and Mary were married for 62 years and lived on the family farm southwest of Renville until Jim’s death in 2009. Mary remained on the farm after Jim died, and stayed actively involved in managing farm activities until she passed. During Mary’s active years, she was a member of the Alter and Rosary Society and Holy Redeemer Catholic Church. Mary and Jim had three children: James, Marilyn, and Michael.  Mary was a devoted and loving mother and farmer’s wife. Mary and Jim enjoyed traveling and took several trips across the United States and Canada. Mary enjoyed playing cards with family and friends, and she had a special fondness for the local Renville ladies with whom she played cards with every other week. She was proud of her Irish heritage and frequently “wore the green” and cooked “corn beef and cabbage” on St. Patrick’s day. She also enjoyed reading, jigsaw puzzles, quilting, embroidery (hardanger), and she loved cooking and baking, especially loafs of bread which she was still baking well into her 90’s.   Mary will be greatly missed by everyone who knew her, especially her children, grandchildren, and great-grandchild as well as her friends.

She is survived by her son and daughter and their spouses: James III (and Margaret) Dvorak of Plymount, and Marilyn (and Kevin) Raske of Alexandria; her grandchildren:  Matthew Raske, Ryan (and Shawna) Raske, Alexander (and Greta) Dvorak, and Caitlin Dvorak; her great grandchildren: Evan, Isaac, Keenan, and Brooklyn Raske, and Flynn Dvorak. She is also survived by her sister, Blanche (and Mural) Boehme of Bird Island, MN.  She was preceded in death by her parents, her husband James, her son Michael, and her brothers: Joseph, Raymond, Daniel, Thomas, Leonard, and Leo.