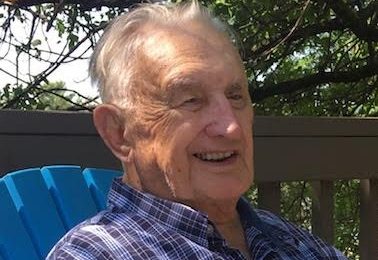 Marvin James Toupal was born on March 13, 1928, in Olivia, Minnesota to Henry Andrew and Rose (Ocenasek) Toupal.  Marvin grew up near Bechyn and attended country school near Beaver Falls.  During this time he lived with his mother and at times with his aunt and uncle Annie and Emil Breitkreutz and helped them on the farm.  He was united in marriage to Lois Yeager on August 14, 1948, in Granite Falls. They lived in New Ulm and Marvin farmed and also worked at the golf course in town.  They later moved to a farm south of Renville and Marvin farmed until retiring in 1979.  In 1980, they moved into Renville and Marvin began working as a custodian at the Renville High School.  Following the consolidation of the schools, Marvin worked as head custodian at the Danube campus until his retirement.  Marvin enjoyed working at the school and being with the students. He also enjoyed hunting and fishing, fishing trips to Canada and deer hunting in the river bottom near his daughter’s home.  A farmer at heart, he enjoyed gardening and loved his apple trees.  He was a member of Holy Redeemer Catholic Church in Renville and a member of the Knights of Columbus.

Survivors include his daughters and son:  JoAnn (and Brian) Gort of Murdock, Dona (and Joseph) Larkin of Renville, Linda (and Todd) Fostvedt of Granite Falls, Patricia (and Douglas) Carnes of Sacred Heart, Teresa (and Russ) Messner of Gaylord, and John (and Christine) Toupal of Renville; 10 grandchildren and 11 great grandchildren; and other relatives and friends.  He was preceded in death by his parents, his wife Lois, his son James, his grandson Dustin Messner, and his siblings: Arnold, Henry, Richard, and Shirley.