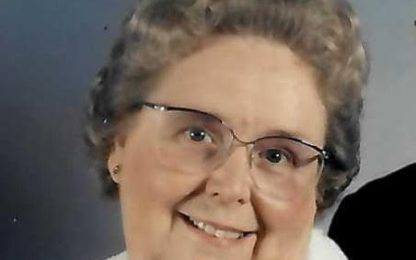 Marilyn L. Wordes was born on January 3, 1934, at the hospital in Willmar, Minnesota the only child to Abner and Rachel (Berg) Rhodes.  She was baptized and grew up on the family farm north of Renville. Marilyn attended grades K-8 at District 140 country school in Crooks Township, and then Renville Public Schools, graduating in 1952.  In 1948, she was confirmed in the Lutheran faith by Rev. A. Strom.  She continued her education at the Willmar School of Practical Nursing, graduating in 1953, with her LPN license.  A career in nursing began at Rice Hospital in Willmar and Stevens County Hospital in Morris.  On June 7, 1958, she married Myron Wordes at First Lutheran Church in Renville. They resided on Myron’s father’s farm north of Renville, and had two sons, Steven and Edwin.  She helped her husband on the farm with the dairy herd and crops. She continued to work for the next 25 years nursing at other places as well, including Granite Falls Manor and the Renville County Hospital in Olivia.

Marilyn was a member of First Lutheran Church in Renville. She enjoyed being on the Health Ministry Team-taking blood pressures on Sunday morning.  She also enjoyed making afghans for the Prayer Shawl Ministry and other benefits like Relay to Life. She spoiled her grandchildren with beautiful crocheted blankets. She spent her spare time making many crocheted and handiwork items as gifts for her family and friends.  She also enjoyed car rides through the river bottom while listening to polka music. She also loved attending family reunions, playing accordion, ice cream, and visiting state and county fairs.

She is survived by her sons and their spouses:  Steven (and Kim) of Renville, Edwin (and Christy) of Renville; her grandchildren:  Trever, Bryce, Devin, Allison (and Kent) TeVelde, Rachel, Whitney, and Brenna; her step grandchildren: Natasha (and Mike) Harlow, and Benjamin Doescher; many nieces, nephews, and other relatives and friends.  She was preceded in death by her parents, her husband Myron, and an infant granddaughter Samantha Rose.