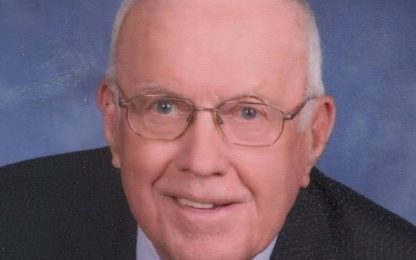 Marcel Mathison, age 92, of Hector, MN died on Wednesday, April 7, 2021 as the result of an auto accident. Funeral services will be at First Lutheran Church in Hector on Saturday, April 17, 2021 at 2:00 p.m. Visitation will be on Friday, April 16 from 5-7 p.m. at the church and will continue for one hour prior to the service on Saturday. The service will be live streamed on the church Facebook page.  Arrangements are with Dirks-Blem Funeral Service of Olivia.

Marcel Jerome Mathison was born to Carl and Dena (Torgerson) Mathison on August 2, 1928 at the family farm in Martinsburg Township, Renville County, MN. He was baptized and confirmed at Palmyra Evangelical Lutheran Church in rural Hector. Marcel attended school at District 113 in Martinsburg Township through eighth grade. Marcel was united in marriage to Lois Fischer on June 6, 1953 at EUB Church in Buffalo Lake and they were blessed with four children. Lois passed away in 2003. On July 7, 2007, Marcel married Jean (Hillman) Anderson at Swedlanda Lutheran Church, rural Hector.

Marcel worked in agriculture all of his life. Marcel not only worked on the family farm but also for several neighboring farmers. He grew soybeans, field corn, wheat, oats, alfalfa, sweet corn, and peas. Pigs, chickens, steers, and 42 milk cows kept him busy year round. During the winter months, he worked at Loftness in Hector doing shop work and driving truck and also spent ten years plowing snow in Renville County.

He was creative and had a mind for invention; he could think of a plan in his head and create it. He liked working with both wood and metal. Restoring old tractors and fixing equipment around the farm kept his tinkering heart happy.

He enjoyed mowing lawn, traveling, and spending winters in Arizona. Having coffee with his friends brought him much joy. Marcel was a faithful member of First Lutheran Church in Hector. He will be remembered for being a gentle and kind hearted man and his love of being a life-long farmer.