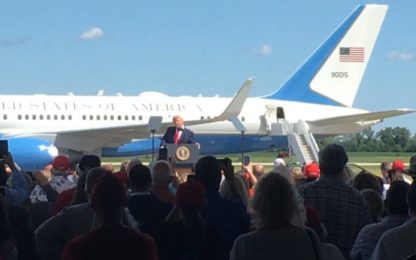 A Mankato woman is accused of spitting on a sheriff’s deputy and another person during President Donald Trump’s Mankato visit last month. Shawntay Kiarra Allen, 27, was charged with felony fourth-degree assault of a police officer, and disorderly conduct, a misdemeanor.

According to a criminal complaint, Allen was in a car that came to a stop as she exchanged words with pedestrians.  When police told the driver of the car to keep moving, Allen got out of the vehicle and began yelling at people in the roadway.

Allen apparently got back in the car, but spit out of the car window towards people on the roadway.  Her spit hit a person who had been standing in front of the vehicle she was in, and a sheriff’s deputy.