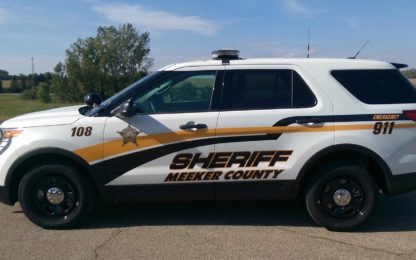 A man with multiple violations of violating a restraining order suffered frostbite while fleeing from deputies in central Minnesota Wednesday evening.

According to the Meeker County Sheriff’s Department, at a little after 6 p.m. on Jan. 27, a deputy saw a pickup being driven by 36-year-old Dustin Nelson, of Litchfield. Nelson was already wanted for multiple violations of a Domestic Abuse No Contact Order. Nelson fled when the deputy attempted to stop him.

Nelson led deputies on a 23-mile pursuit until he disappeared into a wooded area near Highway 24 and 305th Street. Meeker County deputies searched for Nelson for over two hours before the Eden Valley Police Chief found Nelson at the intersection of County Road 34 and 315th Street.

The deputy attempted to stop Nelson but he fled. Nelson led deputies on a 23-mile pursuit, until the deputy lost sight of him in a wooded area off of Highway 24 and 305th Street in Forest City Township. Nelson then fled on foot. Two shot guns, a hand gun, and a knife were located in Nelson’s truck.

Several deputies tracked and searched for Nelson for over two hours. The Eden Valley Police Chief located Nelson on County Road 34, at the intersection of 315th Street, Forest City Township. Nelson was treated for frost bite and then booked into the Meeker County Jail pending formal charges.