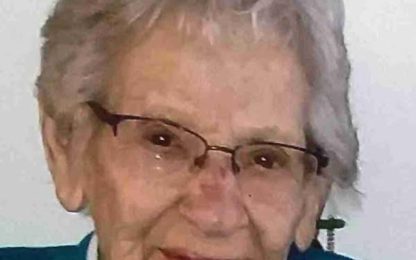 A private service will be held at the Zion Lutheran Church in Sanborn, MN on Friday, December 18, 2020

The clergy will be Pastor Ethan Boese. Interment will be at the Zion Lutheran Cemetery in Sanborn, MN.

Lorraine B. Hellickson was born September 26, 1921 to Adolph and Barbara (Bauman) Lampl in New Ulm, MN. She attended New Ulm Parochial School and then worked at the Men’s Trouser Factory in New Ulm. On June 23, 1940, she was united in marriage to Raymond “Jim” Haak in Sanborn. The couple farmed near Sanborn where they raised their two children. They retired in 1998 and moved into Sanborn, Jim then died 4 months later. On June 5, 2005, Lorraine married Don Hellickson in Sanborn. Don died in 2012. Lorraine had a large vegetable and flower garden at the farm, and enjoyed cooking, canning, and baking. She also enjoyed sewing, crocheting, knitting, and fancy work. Lorraine loved when her grandchildren were with her, especially when they would come stay at the farm.