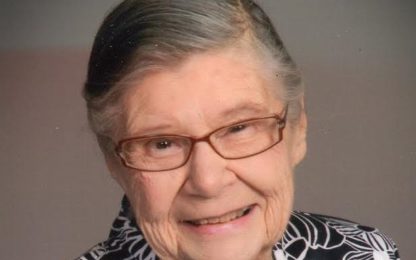 Leona Margaret (Lang) Johnson was born on June 30, 1926, the first of 13 to parents Frank and Mabel (McDowell) Lang.  She grew up in rural Olivia.  On July 11, 1948, she was married to Myron Johnson at the First Lutheran Church in Olivia.  The couple farmed and raised their family south of Belview.  Leona worked part time at the Woolworth Five and Dime in Redwood Falls until 1970.  In 1999, she moved from the farm into Belview.  Leona was a longtime member of the Grace Lutheran Church in Belview, Ladies’ Auxiliary and Red Hat Society.  She enjoyed handcrafts including sewing and quilting.  All of her grandchildren were fortunate to receive homemade quilts, wall hangings and Christmas Ornaments.