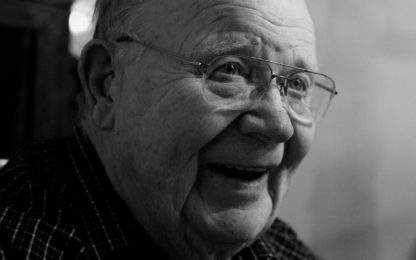 Leo Wallin Anderson, age 100 of Redwood Falls, died on December 16, 2020 at Garnette Gardens in Redwood Falls. A celebration of life will be announced and held in the summer of 2021. Online condolences may be sent at www.stephensfuneralservice.com. Stephens Funeral Service – Redwood Valley Funeral Home is assisting the family with arrangements.

Leo Wallin Anderson was born October 22, 1920 to Karl “Charlie” and Bertha (Wallin) Anderson in Lakefield Minnesota. Leo Spent his early years on his parent’s farms near Lakefield and Storden along with his two sisters Cinthra Cazett and Edith Baumann. On March 24th, 1945 he was united in marriage to Marjorie Emily Gilb. Together they raised 5 children on a farm north of Storden until 1969 when they moved to Redwood Falls. Leo retired in 1982 after working for a decade as custodian at Redwood Falls High School. They moved into Garnette Gardens Assisted Living Center in 2004. Marge passed away on January 9th, 2009. Leo enjoyed playing cards (and many other games), escaping the cold Minnesota winters with his wife Marge (spending 5 months in Harlingen Texas until 2001), and watching Minnesota Twins baseball (seldomly missed watching a game). He especially enjoyed spending time with his family. Most of all, Leo will be remembered for his positive outlook on life. He was always quick to smile and laugh. Leo will be missed.