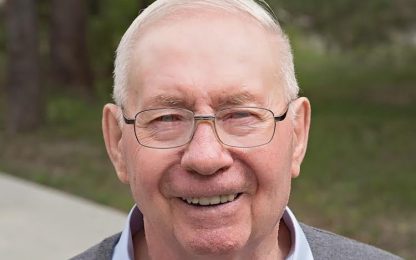 Leo Anton Plotz, age 86, passed away peacefully at Gil-Mor Manor Nursing Home on March 24, 2021, after a long battle with Parkinson’s disease. Funeral services will be held at St. Michael’s Catholic Church in Morgan on Saturday, March 27, at 11:00 am with visitation at the church beginning at 9:30 am. Burial with military honors will follow at the St. Joseph Catholic Cemetery in Clements. In lieu of flowers, memorials are preferred to St. Raphael’s Catholic School in Springfield, MN.

Leo Plotz was born December 5, 1934, in Springfield, to Joseph and Bertha (Bruckbauer) Plotz. He attended elementary school in Clements and graduated in 1953 from Springfield High School. He entered the U.S. Army in 1955 and served two years. Then he returned to rural Clements where he farmed. He married Janet Grosam on June 8, 1959. Working together, they built their farm life raising chickens, hogs, and cattle. Through rain and drought, they planted their acreage with corn and soybeans. In 1975, they expanded their farming operation and began raising sugarbeets. They established Plotz Farms which continues to be operated by his son, Alan, and grandson, Andy.

Leo was active in many farm-related organizations. He was a distributor for Jacques Seed Corn where his sales earned him many memorable trips exploring the farming operations in Brazil, Peru, Mexico, and Hawaii. He was on the board of directors for the Redwood County Pork Producers Association and the Southern Minnesota Beet Sugar Cooperative.

Leo was also involved in many community organizations. He was a member of St. Joseph’s Catholic Church in Clements until it closed, then joined St. Michael’s Church in Morgan. He was on the board of directors for the Redwood Electric Cooperative for 14 years. He also served on the board of directors for Clements Lumber Inc. He was active in the Clements Lions and a member of the Robert Siekora American Legion Post 519 in Clements for 62 years.

He loved playing cards, especially poker, morning coffee at the elevator with the men, and fishing. Leo and Janet’s camper on Norway Lake near Spicer became a frequent weekend getaway. In 1986, they ventured to Canada for a fishing trip which evolved into the Plotz Family Fishing Vacation, an annual event that continues to this day.  In their retirement years, they wintered in Panama City Beach, Florida, where they met many wonderful friends. Leo was diagnosed with Parkinson’s disease in 2001. His family is grateful to the Gil-Mor Manor staff for their loving care during the last five years of his life.

Leo was a hard-working, community-serving, family-loving man with a quiet manner and a quick wit. Farming was his life. He kept a little notebook in his front shirt pocket that was his farm ledger and, although only he could read his writing, he could calculate farm yields and acreage in a split second. He was kind and generous and will be greatly missed by all.

He is survived by his wife, Janet; children, Susan (and Tom) Bornick of Fall Creek, WI, Linda (and Jay) Pederson of Richmond, Joleen Koopman, of Sauk Rapids, Alan (and Rosann) Plotz of Clements, and Stacy (and Brian) Brzezinski of Fort Ripley; 14 grandchildren: Cassie (and Jason) Jonas; Andy (and Brooke) Plotz, Meghan and Anna Plotz,  Jeff Bornick and Katie (and Jake) Smith; Kyle (and Mandi), Mark (and Steph), John, Scott, Clare, and Nate Pederson; Ally and Lindsey Brzezinski; 10 great-grandchildren; and siblings: Leona Prokosch of Redwood Falls and Irvin (and Donna) Plotz, of Clements, and family friend Jay (and Tami) Baune and the Baune family.

He was preceded in death by his brother, Ray Plotz and his wife Audrey, and in-laws: Marge Beert, Audrey Plotz, Leo and Ordell Grosam, Leo Prokosch, and great-granddaughter Charlotte Jonas.