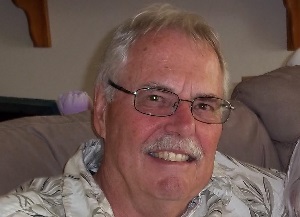 Lawrence (Larry) Charles Jacobs, age 74, died on December 4, 2020, at St. Cloud Hospital, from COVID-19. Due to Covid restrictions, a private Mass of Christian Burial will be at St. Mary’s Catholic Church in Bird Island with Rev. George Schmit as celebrant. Interment will follow in the Olivia Cemetery. Arrangements are with Dirks-Blem Funeral Service of Olivia.

The service will be live streamed on the following link on Friday, December 11 starting at 1:15 p.m.: https://my.gather.app/remember/larry-jacobs-2020

Larry was born on September 22, 1946, to Henry and Florence (Lippert) Jacobs in Willmar, MN. Larry was the second of twelve children. He was baptized and confirmed in Holy Redeemer Catholic Church in Renville.  Larry grew up on the family farm north of Renville.  He graduated from Renville High School in 1964.  Larry enlisted in the Navy and after serving our country, he attended the University of Minnesota where he received his Bachelor of Science Degree in Business. Larry worked at Farm Credit Services as an agricultural banker in Olivia.  In 1999, he started his career as Renville County Auditor-Treasurer.  He loved his job and worked there until his retirement in 2014.

On November 25, 1978, he married Nancy Plowman Vogt and became an instant dad to Kristine and Joe and later they were blessed with a son, Matthew.

To Larry, nothing was more important than family. He was a loving son. To his siblings he was not only a brother, but a protector, a friend, and a confidant. He loved his children, and to say his grandkids were the “apple of his eye” would be the biggest understatement known to humankind. A favorite vacation was when Larry and Nancy took their grandchildren, Bobby and Paige, to South Dakota. The years he and Nancy snow-birded in Arizona were a blessing as he could be closer and spend more time with Payton and Grayson. And he loved his yearly family fishing trips to Canada.

Larry was an avid golfer and if possible, he would have golfed every day. But his favorite time on the golf course was with his family…Old Duffers vs Young Bucks! He enjoyed playing cards, especially when he was winning.  He was competitive by nature, whether it was playing ping-pong, shooting darts, or throwing bags. He loved going on fishing trips and playing poker with buddies, listening to music and dancing. He also had a serious sweet tooth, and no night was complete without a small (or large) dish of ice cream.

Larry was a true Minnesotan. There was no such thing as a stranger, just a friend he had yet to meet. He had an uncanny way of connecting with people and making them feel comfortable. He was quick with a story or joke and was willing to talk to anyone…anywhere…about anything. He was Cliff Claven personified, always having something to add to any conversation, not to mention an eerie resemblance.

Larry loved going to sporting events and cheering on his team. He was always the biggest and loudest supporter, except with the referees. If you close your eyes and really listen, you might still be able to hear his shouts of contempt (even if the call was right!). If you had ever had the opportunity to ride in a car with him, you would quickly find out how poor of drivers are out there and how he believed they were all out to get in his way and ruin his day.

When Larry and Nancy moved to Waite Park in 2018, he immediately got involved and was very active in the community serving as compliance officer of the Willow Pond HOA.

Larry is survived by his loving and caring wife of 42 years, Nancy Jacobs; his children Kristine (and Jon) Drews of Princeton, MN, Joe (and Jessica) Vogt of Albuquerque, New Mexico, and Matthew (and Natalie) Jacobs of Mesa, Arizona; grandchildren: Bobby and Paige Drews and Payton and Grayson Jacobs; his siblings and in-laws: Joanne Balgaard, Lyle (and Judy) Jacobs, Eileen (and Gary) Melin, Ron Svoboda, Gloria Larson, Marcia (and Jerome) Taatjes, Denise (and Jeff) Iverson, Nancy (and Phil) Standfuss, Marlys (and Keith) Sharpe, Kimberly (and Dean) Boike, Loran (and Betsy) Jacobs, Jay Thorkelson, Bonnie Plowman, and Becky (and Kent) Gustafson. Larry was preceded in death by his parents, Henry and Florence Jacobs, his sister Paulette, his father and mother-in-law, John and Ione Plowman; his brothers-in-law:  Lowell Larson, Dennis Balgaard, and Duane Plowman; and his sister-in-law, Nola Thorkelson.