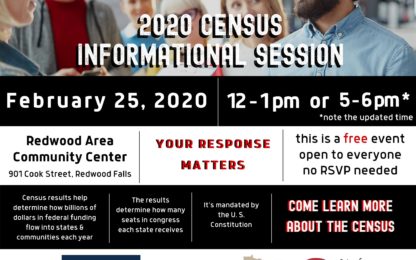 Maybe you’ve heard there is a census coming up this year. Every 10 years, the federal government tries to find out how many people there are in the United States. And yes, it is the law that you have to be counted.

Redwood County and the city of Redwood Falls are teaming up on Feb. 25 for an informational meeting about the census, and why the count of area residents could affect the amount of state and federal funding the county and city get in the future.

KLGR’s Joshua Dixon spoke with representatives from the county and city about why it’s important for area residents to be counted by the census in the next few months: