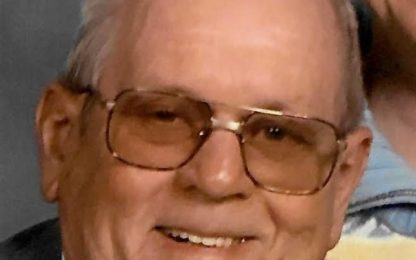 Jaynell “Jerry” L. Ashburn was born on September 1, 1934, in Clara City, Minnesota to Roy and Edith (Vesey) Ashburn. He grew up in the Sacred Heart area and attended school in Granite Falls, graduating in 1952.  In 1953, Jerry was called to serve his country, he did so proudly in the United States Navy.  Following the service, he returned to Sacred Heart and was united in marriage to Muriel Chelin in June of 1955.  Jerry and Muriel raised their family and farmed near Sacred Heart for many years.  Muriel passed away in 1981.  Jerry later drove truck for Arlen Curtiss of Montevideo and it was during this time he met Pat Benner.  They were united in marriage on August 3, 1985, in Billings, Montana.  They made their home in Sacred Heart and have lived there since.  Jerry was a member of Our Savior’s Lutheran Church in Sacred Heart.  He enjoyed and was a talented woodworker and was an avid race fan.  His family was very important to him and he loved attending his granddaughter’s sporting events.

Jerry is survived by his wife Pat, his son: Steve (and Jobi) of Sacred Heart, Dave (and Karen) of Sacred Heart, and John (and Heather) Benner of Willmar; his six grandchildren:  Zachary (and Julie) Chapman, Doug Chapman, Austin (and Alexis) Ashburn, Kelsi Benner, Brittanie (and Cory) Croll, and Alyssa Ashburn; 16 great grandchildren, his two sisters: Judy (and Belwin) Rode of Benson, and Joy (and Dean) Halvorson of Granite Falls, and his sister-in-law Molly Ashburn of Sacred Heart; his brothers-in-law: Jim (and Carol) Chelin of Hutchinson, and Curtis Chelin of San Francisco, CA;  many nieces, nephews, and other relatives and friends.  He was preceded in death by his parents, his wife Muriel, his brother Bud, and brother-in-law Joe Benson.