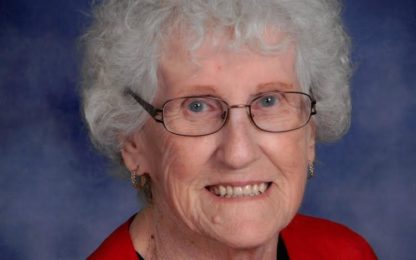 Helen Schneider, age 93, of Redwood Falls, passed away on Sunday, October 11, 2020 at Seasons Hospice House in Redwood Falls, Minnesota. A Private Mass of Christian Burial will be at St. Catherine’s Catholic Church with interment at St. Mary’s Cemetery in Bechyn, Minnesota. In lieu of flowers, memorial contributions may be made to Carris-Health Hospice.

Helen A. Schneider was born August 21, 1927 in Redwood Falls, Minnesota. She was the daughter of Nels and Mabel Hendrickson. There she attended school through 8th grade. She found employment as a waitress before meeting her husband, Henry (Bud) Schneider. They married on July 16, 1947 at St. Mary’s Catholic Church in Bechyn, Minnesota.

They lived in Troy Township, moving to Olivia in 1956. They returned to Henryville Township for a short time before moving to Geneva, Minnesota, in 1957, and later to Owatonna, Minnesota. In 1967, they moved to Bechyn and re-opened the Bechyn Store, operating it as “Bud & Helen’s”. Then in 1990, they moved to Redwood Falls.

Helen was a member of St. Catherine’s Catholic Church in Redwood Falls and also the CCW. She also volunteered her time at the food shelf and Wooddale Home.

In her life, she remained active, gardening, canning, tending flowers, bowling, mowing lawn and raising four children. In her later years, Helen was blessed with a special friendship with Roman Roiger.

Helen died on Sunday, October 11, 2020 at Seasons Hospice House in Redwood Falls at the age of 93 years, one month and 20 days.

Helen is survived by her sister, Violet Harder and brother, John Hendrickson, her Sons, Michael, Steven and Kevin Schneider, and daughter Kathy Kretsch; Two Granddaughters, a grandson-in-law and 10 great grandchildren. As well as a sister-in-law and brother-in-law, Rita and Joe Walters, nieces and nephews.

Helen and her husband are now able to resume their love of dancing together!

The family is so grateful for her care by the staff at Wooddale Home and Carris-Health Hospice.