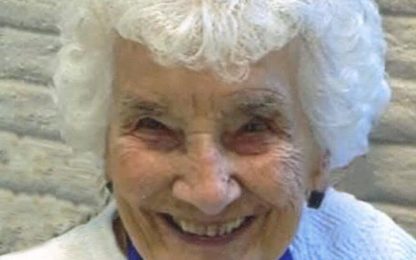 Grace Lucille Fischer Lueck was born May 28, 1918 in Flora Township, Renville County, MN to Joseph and Eudora Fischer, the oldest of 8.  She passed away on September 9th, 2020 at the Renvilla Nursing Home, at the age of 102.  A Celebration Of Life for Grace will be announced at a later date. A private family burial service will be at Zion United Methodist Cemetery, Danube, MN.

Grace attended country school at District #7; later staying with her grandparents (Sam and Hannah Bierlein) in Renville while attending the Renville High School.  She graduated in 1936, followed by completion of her Normal Training.  She began a teaching career at the Beaver Falls School (#135) in 1936 and 1937.  In 1938 she taught at District 12 in Henryville Township.  In 1939 and 1940 she taught at District 5 in Beaver Falls.  Her saved contracts show that her salary had grown from $40/month to $75/month during this period.

Grace married Orrin at the Middle Creek Church on June 18, 1941.  They lived on the Lueck farm where Harriet and Lowell were born.  They moved to Danube in 1945 where Keith, Calvin and Craig were born.  For many years, Orrin was partnered in business at Lueck’s Garage, the Case Implement dealership in Danube.   Grace returned to teaching in 1953, teaching in Roseland until 1960.  After consolidation, Roseland joined the Danube district.  In Danube she taught 3rd grade until retirement in 1976.  Persistent in maintaining accreditation, continued education culminated in her earning BS Degree in 1968.

Grace was baptized and confirmed in the Methodist church in Renville, married in the Middle Creek Evangelical United Brethren Church, and raised her family in the Danube EUB Church, each later becoming United Methodist Churches.  She was involved in many clubs and groups while living in Danube including United Methodist Women, Civic Club, Birthday Club, Danube Historical Society, Red Hat Society, and Danube Senior Citizens.  She enjoyed preparing and presenting “programs” for each of these various organizations, and was twice honored as Grand Marshall of the Fun Days Parade.

Grace and Orrin loved to travel, especially enjoying opportunity to travel to Hawaii, as well as their many family vacations to “the lake” and to California.  To celebrate their 50th anniversary they took a cruise to Alaska.  After retiring in 1976, they became “snowbirds” in Mesa, Arizona, where Grace spent each consecutive winter until 2019.  They especially enjoyed their retirement playing cards and other games, dancing, traveling and going out and traveling with their many friends and relatives.   She was blessed with excellent health most of her life.  However, subsequent to Orrin’s death, Grace developed Macular Degeneration, which eventually took her vision.  Stoic resourcefulness permitted her to enjoy continued independent living in her homes in Arizona and Danube.  Children Harriet (Mesa) and Calvin (Danube) were available to assist as needed.  She was always happy to be greeted on her twice-daily walks uptown.

Diagnosed in the Spring of 2017, Congestive Heart Failure began to take its toll.  Indeed, she was beginning to “show her age.”  Nevertheless, she was happy to celebrate her 100th birthday in Arizona and Danube in 2018.  She chose to move to the Renvilla Nursing Home in 2019, the day following her 101st birthday.  She appreciated their tender care, as well as that of Dr. Ahlquist & later Hospice.  She remained active, enjoying the various opportunities for social engagement, as well as the daily assist folding towels with the other residents.

Death will not extinguish her light.  It has simply put out the lamp because dawn has arrived.