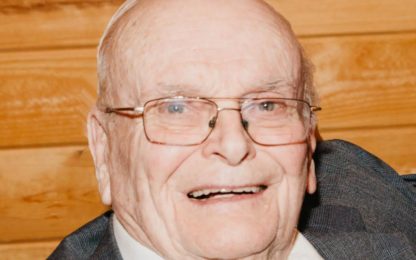 Gordon Lewis Carity, age 92 of Redwood Falls, passed away Wednesday, August 26, 2020 at Compassionate Cottages in Willmar.  Graveside Services for Gordon and Gladys Carity will be 11:00 a.m. Thursday, September 3, 2020 at St. Catherine’s Catholic Cemetery.  Guests are asked to bring their own chair if desired & practice social distancing.  Celebration of life and time for fellowship will be held at the Lower Shelter in Ramsey Park, immediately following the service.  In case of inclement weather, the service will be held at the Lower Shelter at Ramsey Park.  In lieu of flowers, memorials are preferred to St. Catherine’s Catholic Church or Cemetery.  Online condolences may be sent at www.stephensfuneralservice.com.  Stephens Funeral Service – Redwood Valley Funeral Home is assisting the family with arrangements.

Gordon Lewis Carity was born July 22, 1928 to Lewis and Esther (Denniston) Carity in Redwood Falls, Minnesota.  He was baptized and confirmed at St. Catherine’s Catholic Church in Redwood Falls.  Gordon attended district 1754 until the 8th grade and continued his education at the Redwood Falls High School.  On January 16, 1951, he enlisted in the United States Army and served until May 8, 1952.  Gordon was a member of the American Legion Melvin Daskam Post #38 in Redwood Falls and worked his way up to being a legion commander. Gordon spent many years working on the family farm, where he would milk the cows, raise the pigs and chickens and farmed the land.   He was united in marriage to Gladys Mulenberg on September 22, 1952 at St. Catherine’s.  The couple bought their first cabin on Diamond Lake in 1973.  Once they retired, Gordon and Gladys moved to their lake cabin in 1988.  Gordon enjoyed going fishing and playing cards, especially cribbage.  Gordon loved going hunting, especially for deer and duck season.  To pass the time he enjoyed gardening, canning and going to Jackpot to play Blackjack. Gordon and Gladys moved into the Compassionate Cottages in Willmar in December of 2016.