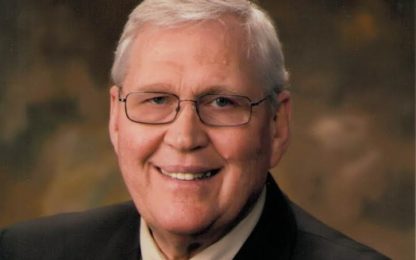 Gerald (Jerry) Wayne Mulder of Renville, MN, passed away peacefully after a courageous battle with cancer on Tuesday Dec 22nd, 2020 at his home surrounded by his wife, and loved ones at the age of 73. Funeral services will be held on Monday, December 28, 2020, at 10:30 a.m. at Emden Christian Reformed Church in Renville.  The Rev. David Zigterman will officiate.  Burial with military honors will be in Fairview Cemetery in Renville.  Visitation will be Sunday, from 5-7 p.m. and will continue on Monday one hour prior to the services all at the church in Renville.  Arrangements are with Dirks-Blem Funeral Service, Renville, MN. Memorials may be designated to Disabled American Veterans Charity, Wounded Warriors Project, or Renville County Hospice.

He was born on November 23rd, 1947 in Montevideo MN to Garrit & Catharine (Goeman Pott) Mulder.   Jerry married his high school sweetheart, Connie Mae Just on April 22nd, 1967. They had 53 wonderful and blessed years together.

Jerry was raised on a farm in Renville, attended Renville High School, and was active in football, basketball and baseball. This led to Jerry’s fateful meeting of Connie at the State High School Basketball Tournament and the path to love ever after. In the early years of marriage Jerry served in the Air Force and is a Vietnam War Veteran.

After his service to our country, Jerry and Connie settled on the farm north of Renville in 1970, where they began farming. Life on the farm included growing corn & soybeans, selling seed corn, collecting dogs & cats, raising beef cattle, feeder hogs & four of the best children in the world.  While farming alongside his brother Rodger, Jerry’s farming accolades over the years include, Renville County Farm Family of The Year, Minnesota Corngrowers State Board member, Honorary Lifetime member and “Kernel” award winner. Jerry was also awarded the “Distinguished Person in Agriculture” commendation by the Minnesota House of Representatives. After losing his leg to a farming accident in 1989, Jerry volunteered his time to speak publicly about farm safety and his unshakable faith.

In 1990 he found a new passion as a Jr. High boys basketball coach. Which eventually led to being a Freshman and Assistant Varsity Boys Basketball Coach. Jerry was very successful as a coach never posting a losing season at any level. About this same time Jerry also became a school bus driver, (27 years) and Sunday school teacher. Jerry relished in his opportunities to interact, coach, lead and influence youth through these activities.

As a Father and Grandfather, Jerry loved attending hundreds of school concerts and countless sporting events supporting his children and grandchildren. Often times he was the loudest voice in the gym or on the field offering unsolicited coaching and officiating advice for all to hear.

Jerry impacted many lives and he will be deeply missed.