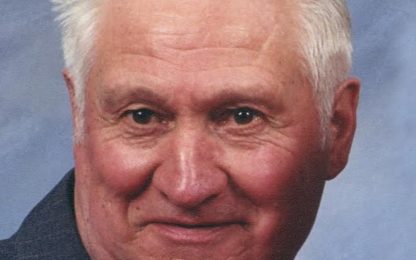 George Melsha, age 88, of Bird Island died Monday, November 30, 2020 at Hutchinson Health in Hutchinson.  Private family services will be held at Our Savior’s Lutheran Church in Bird Island with Rev. Mandy France officiating. Burial is in the Bird Island City Cemetery.  Arrangements are with Dirks-Blem Funeral Service of Olivia.

George August Melsha was born January 28, 1932 in Bird Island, MN, to Joseph and Margaret (Lingl) Melsha. He grew up and attended school in Bird Island.  He served his country in the U.S. Army from February 27, 1953 to February 24, 1955 in the Hell on Wheels Division.  George married Margene Toren on April 25, 1959 and they were blessed with two children.  He worked for over 40 years at the Bird Island Grain Elevator.  George enjoyed camping, tending his vegetable garden, riding bike with family, fishing, and playing cards.  He also enjoyed making many crafts over the years that included painting loons and making porch lights.  George loved riding his moped around town and spoiling his grandchildren.

George is survived by his daughter Deb (and Ron) Sullivan of Bird Island and his son Brent Melsha of Hector; his five grandchildren: Joey (and Robyn) Sullivan, Katie (and Chris) Fennema, Troy (and Ramsey) Melsha, Michelle Melsha (and Nick) and Branden Melsha; and his great-grandchildren: Wendy, Leo, and Millee Sullivan; and his siblings: Gladys, Florence, Art, and Arnie. George was preceded in death by his parents; his wife Margene; and his siblings: Delores, Pearl, Jerome, Madalyn, Louise, Margaret, Harold, and twin sisters at birth.