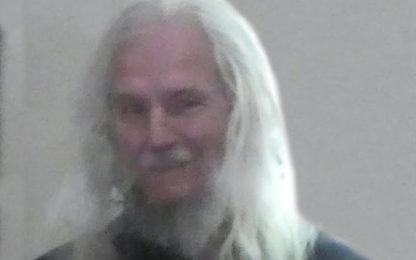 A public walk-through visitation for Garvin Hines, 66, of Belview, will be held on Thursday, March 18, 2021, from 5:00 until 7:00 p.m. at the Sunset Funeral Home in Echo. A private family interment will take place at a later date.

Born on July 16, 1954, Garvin John Hines (alias Cottontop, Old Blue Eyes) was welcomed into this world by Ernest and Amanda (Standfuss) Hines and his brother George. Garvin touched people’s lives in many ways and left his mark on this world.

Worked Hard, Played Hard! After enjoying woodworking class and graduating from Belview High School, Garvin began working the winter campaign at the Renville Beet Plant until he retired in 2007. Plus, he worked at the Delhi Fertilizer plant for several years. During the rest of his summer, Garvin entertained himself and enjoyed his free time partying with friends providing us with many memories! Fill in the blank ____ with your own stories.

After our father Ernest passed, Garvin provided companionship by helping our mom Amanda on the farm. When she moved to the nursing home, he visited her there every day.

Garvin will be remembered for many different things. RIP as you begin your next journey, Garvin.

Garvin died on Thursday, March 11, 2021, at the St. Cloud Hospital. He is survived by his siblings Trudy (Dan) Woltjer of Vail, AZ, David (Brenda) Hines of Spicer, MN, and sister-in-law Diane Hines of Vail, AZ, as well as many nieces and nephews.

He was preceded in death by his parents, Ernest and Amanda, and siblings George, Daryl and Baby Boy Hines.

Memorials preferred to the Redwood Area Animal Shelter or the American Cancer Society.