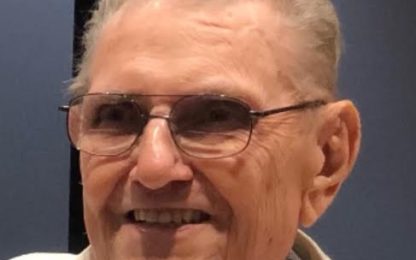 Private Funeral Service will be held at the New Hope Lutheran Church, Comfrey, MN on Thursday, November 12, 2020 at 11am.

Private visitation will be on Thursday from 10 to 11 am at the church.

The clergy will be Jerome Klotz.

Interment will be at the New Hope Faith Lutheran Cemetery in Comfrey.

Francis was born on October 28, 1929 in Prairieville Township near Evan, MN to Jens & Louise (Guhlke) Ericksen. He was baptized and confirmed at St. Matthew’s Lutheran Church in Evan. He attended Sleepy Eye Public School until the 8th grade and then attended Comfrey Public School. He stayed home and worked on the farm while his brother was in the service. On December 6, 1947, Ike married LaDonna Mae Fredin in St. Paul, MN. They returned to Comfrey to make their home. They were blessed with four children. Ike was a lifetime member of Faith Lutheran Church and following the tornado, New Hope Lutheran Church. Ike worked 48 years for Carlson Brothers Construction Co. operating heavy machinery. Summertime became and adventure when construction jobs took Ike up north, he would often bring the family along to enjoy the lakes and northern Minnesota. Driving school bus was another one of Ike’s occupations. He loved to fill his days with activities. In younger years, he and his children would spend the day bullhead fishing at near-by lakes. In the fall, his days were filled with pheasant hunting. He enjoyed playing cards with friends in “The Shed”. Later on, watching baseball and football games provided many hours of entertainment. Ike was always amused by Jerry’s friendly bets regarding which team would win. Seems, Ike generally selected the underdog, but was victorious many times. He even proudly, jokingly wore his Green Bay Packers jacket around town. Most recently, Ike was a daily visitor to Cenex for the latest scratch-offs and to chat with workers. Every morning he faithfully watched “The Price is Right”. Ike genuinely liked passing time by talking to individuals. Spending time with his wife was important. Date nights to Jackpot provided an evening of entertainment. Together, they enjoyed special TV shows like “Molly B” and Bandwagon’s polka music. Ike will be remembered as a joker and teaser. He had the special ability to connect with people. He truly loved visits from all of his children and grandchildren.
He is survived by his wife, LaDonna of Comfrey, children, Gerald “Jerry” and LaDonna “Donna” Ericksen of Comfrey, Loreen “Laurie” Haugen of Windom, Janet Hansen of Sleepy Eye, 10 grandchildren, 18 great-grandchildren and 3 great-great grandchildren. He was preceded in death by his daughter, Diana Pidde, siblings, Gloria Wall Teufel, Roland “Butch” Ericksen and Marion Peitz.