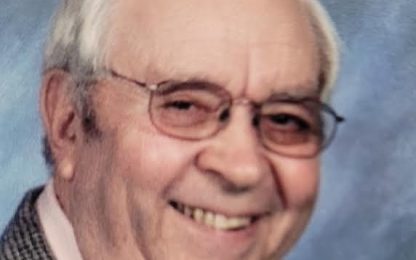 Francis George Schweiss, age 88, of rural Fairfax, MN, passed away peacefully on Saturday, April 24, 2021, at Methodist Hospital, St. Louis Park, MN. He was a life-long member of St. Andrew’s Catholic Church, Fairfax, where he received the sacraments and where his celebration of life will be held on Wednesday, April 28th. Visitation for Francis will take place at the church from 11:00 a.m. until 1:00 p.m. Mass of Christian Burial will follow at 1:00 p.m. with Father Bruno Santiago, OSB as celebrant.  Burial is in St. Andrew’s Catholic Cemetery, Fairfax.  Arrangements are with Dirks-Blem Funeral Service of Olivia.

Francis was born at home in Wellington Township, Renville County, MN, to William and Anna (Beck) Schweiss on April 26, 1932, the oldest of five children.  He attended school through eighth grade, when he discontinued his formal education to help on the family farm. On February 3, 1959, he married Mary Catherine (Kay) Hager.  Together they raised two daughters, Denise Marie and Rita Kae.

Francis’ achievements were many and his interests varied.  He farmed and raised beef cattle and Schipperke pups until his retirement from farming in 1990, when he began working full time for Prinsco in Fairfax.  A work-related injury forced his retirement at age 83. Francis served many years as chairman of the Wellington township board and served two terms as Renville County commissioner, where he was a member of the Renville County Rail Authority and Library Board.  He continued to sell Archer Oil and was active on many boards and committees, including Two Cylinder Club, where he restored a Model A John Deere tractor.  Francis obtained his private pilot’s license and enjoyed giving his family plane rides.  He was also a member of the Civil Air Patrol.