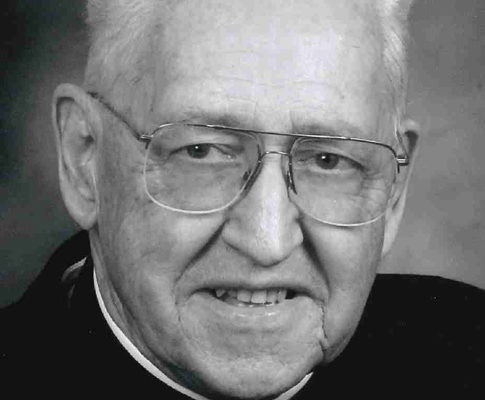 COVID 19 regulations and social/physical distancing will be followed.

Clergy presiding at the visitation and Mass of Christian burial will be Fr. John Donahue and Fr. Mark Steffl.

Interment will be at St. Mary’s Catholic Cemetery in Sleepy Eye.

In lieu of flowers, memorials can be made to any of the parishes Fr. Bob served, St. Mary’s Catholic Church (Sleepy Eye) or St. Mary’s School.

The funeral service will be live streamed on the St. Mary’s Church Facebook page.

Father Bob was born on the Goblirsch family farm (nine miles south of Sleepy Eye) on November 24, 1933 to Frank and Clara Goblirsch. The doctor was summoned for the home delivery but lost his way to the farm; Father Bob’s dad was left with the honor of delivering him. Father Bob grew up on the family farm, involved in all aspects of farm life and work. It was evident that Father’s gifts did not lie in the farming industry and his father prompted him to think of another calling. Father Bob’s first four years of education were in a one-room schoolhouse, District 33, in Albin Township. He then attended St. Mary’s School in Sleepy Eye and graduated in 1951. He attended Nazareth Hall Minor Seminary in New Brighton, Minnesota from 1951-1954 and entered St. Paul Major Seminary in the fall of 1954. On February 21, 1960 Father Bob was ordained to the priesthood in his home parish of St. Mary’s in Sleepy Eye. His first Mass was celebrated on February 28, 1960. Father’s first assignment as an associate pastor was at St. Mary’s parish in New Ulm. In 1962 he was assigned as pastor of St. James parish, Nassau, Minnesota. At that time Father Bob welcomed his mother Clara as his longstanding housekeeper. She lived with him until her death in 1986. Father’s parish assignments included: April 1960 – St. Raphael’s, Springfield and St. Thomas, Sanborn; September 1960 – St. Mary’s, New Ulm; September 1962 – St. James, Nassau; September 1970 – St. John Cantius, Wilno; July 1977 – St. Peter & Paul, Ivanhoe; June 1986 – St. Michael’s, Madison; and June 1998 – St. John’s, Ortonville, St. Joseph, Rosen, and St. James, Nassau. Father Bob’s career as a priest was highlighted by several significant construction initiatives: He oversaw the building St. James Church in Nassau in 1968. Of note, the St. James Church architecture won two national design awards. Father led the rebuilding of St. John Cantius School in Wilno, along with renovation of the St. John Cantius Church. He also led the building of a new rectory and parish center at St. John’s parish in Ortonville in 2001. He was instrumental in establishing the Bonczak Seminary Fund. The fund has generated over a million dollars of assistance funds. It has helped over one hundred priests with seminary tuition and aided the Schoenstatt Sisters with building the Schoenstatt Chapel on Sleepy Eye Lake. Father was a gifted and motivational writer and speaker. He was able to distill the scripture into an easily understood and actionable message for his congregations.

His homilies were enjoyed by many over the years. He loved to converse with parish members and built strong and enduring relationships with many in the western parishes in which he served. He was very dedicated to his mother, caring for her in the last years of her life. Father spent a three month sabbatical in Rome in 1985. He enjoyed traveling with his mother and family members over the years. Father loved the outdoors, spending time pheasant hunting, at the lake, swimming and motorcycle riding. He treasured visiting with his family and made this a priority in his life. He was very supportive of education, prompting his nieces and nephews to consider a wide variety of career options available to them. Father enjoyed a rich and fulfilling career as a priest, celebrating 60 years of priesthood in 2020. He retired to Divine Providence Villa in 2013 and transitioned to the Divine Providence Nursing Home in 2019. He continued his ministry at Divine Providence during the time he lived there by saying mass, leading prayer and visiting with those who resided in the facility.

He was preceded in death by his parents, Frank and Clara (Sellner) Goblirsch and siblings: Edwin (Adele), Sister M. Bertille Goblirsch, OSB, Alice (Harold) Dorn, Eugene, Gerald in infancy, and Denis (Lynn). Survivors include his sister-in-law Agnes Goblirsch of Rochester and nieces, nephews, great-nieces, great-nephews and other relatives and friends.