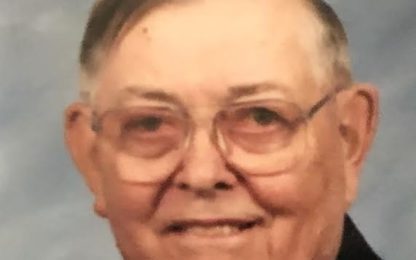 He was born on November 17, 1923, to Harry and Esther Schroeder at the family farm in Flora Township.  He was baptized and confirmed at the Middle Creek United Methodist Church and was a member until moving to Olivia in 1991, when he became a member of Faith United Methodist Church.  He went to Country School district 22 and then began farming.

On February 28, 1954, he married Carol Nordby.  Together the next 66 years they farmed, raised their family, retired and moved to Olivia.  This last year they were in Redwood Falls first residing at Wood Dale and more recently River Valley.  They had three children, Jolene, Dean and Dale.  Edwin enjoyed spending time visiting with his family and friends, and sharing stories with his grandchildren.  He enjoyed farming, raising animals, especially cattle.  His hobbies included doing woodworking, bowling, taking motors and things apart to recycle, playing bingo, doing puzzles and word finds.  They enjoyed taking bus trips, especially “mystery tours” after they retired.

He is survived by his wife, Carol; his sons: Dean (Marj) their children Rachel and Macius; Dale (Lisa) their sons Jacob and Colby; daughter Jolene Bunting her sons Joshua and Jason; sister, June Raarup; and his nieces and nephews.  He was preceded in death by his parents Harry and Esther; sister Gladys (Don) Duehn; and brothers-in-law Arnold Lueck and Jerry Raarup.