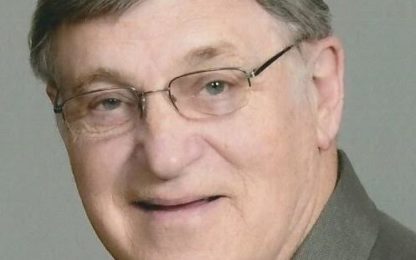 Douglas Ray Henning was born September 11, 1946 in Renville, MN to Stella (Pullen) and Emerald Henning.  He graduated from Renville High School in 1966 where he was an active leader in the Future Farmers of America (FFA). He furthered his education in Industrial Drafting at the Granite Falls Area Technical Institute in 1968. Doug was a dedicated military veteran, having served from 1968-1971 in the United States Army as a cook. He was united in marriage to Karen Phipps in 1968. They welcomed and cherished three children—Stephanie, Stacy, and Brent. Doug and Karen were overjoyed to be grandparents and great grandparents, spending much of their time watching their grandchildren grow.

The town of Renville had a special place in Doug’s heart. He served as mayor from 1986-1989, and continued his passion for cooking by owning and managing Doug’s Café from 1975-1990. The Henning family moved to Granite Falls in 1991 where Doug was an insurance agent. He retired in 2012.  Doug was best known for building strong relationships, loved getting to know others and enjoyed putting a smile on everyone’s face. He was a passionate volunteer, committed to serving the community in many ways, including an active member of the Granite Falls Lutheran Church, American Legion, National Wild Turkey Federation, and Granite Falls hospital board. Doug was an avid outdoorsman, including hunting, fishing, and camping. One of his greatest joys was hunting and cooking with family and friends at the Maple Ridge Hunting camp. Doug loved introducing youth to the outdoors and spent time mentoring and guiding.

We will miss his generous heart, kind spirit, and genuine laughter. Blessed be his memory.

Funeral services will be held at the Granite Falls Lutheran Church on Saturday, July 18, 2020. Visitation from 9:00-11:00 a.m., followed by a private family service. Burial will be held at 2:30 p.m. at Fairview Cemetery in Renville. No lunch will be provided. Please note that temperature checks and masks will be required. Understanding not everyone can join in person, a live stream at 1:00 p.m. will be available via Facebook Live at https://www.facebook.com/GFLCGFMN/. The family also welcomes photos and memories emailed to [email protected]. In lieu of flowers, memorials are preferred.