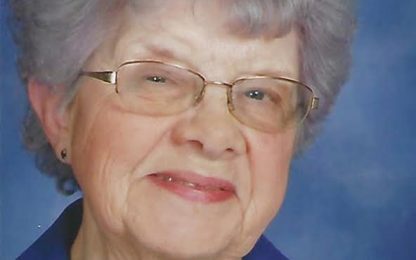 Dorothy Ann Dietl, age 85, of New Ulm, MN and formerly of Lamberton passed away peacefully on May 17, 2021 at Woodstone Senior Living Center in New Ulm.

Dorothy Ann Dietl was born on January 5, 1936, in Mankato, MN, the daughter of Raymond and Agnes (Hages) Westermayer.

She attended Loyola Catholic School in Mankato, graduating in 1954. Dorothy then attended Mankato State Teachers College and studied nursing. While in college she was a member of the Newman Club and the newly organized Nurses Club. After receiving her college diploma, she worked as a Nurse at Immanuel Hospital in Mankato from 1957 through 1963.

September 14, 1963, Dorothy was united in marriage to Joseph G. Dietl in Mankato. The couple resided in Gibbon, MN from 1963 to 1969 while Joe worked for the Gibbon Gazette. The couple moved to Lamberton in 1969 after they purchased the Lamberton News. Dorothy worked as a licensed practical nurse at Valley View Manor in Lamberton for many years before her retirement from nursing in 1992. She was an active member in the Lamberton community participating in many organizations and volunteer positions.

She was a devoted member of St. Joseph Catholic Church for 48 years. She thoroughly enjoyed time spent with her family from the annual summer road trip vacations with the camper to the holiday get-togethers and weekends at the lake house. Joe and Dorothy moved to New Ulm in December 2017 after residing in Lamberton for more than 48 years.

She was preceded in death by her beloved husband of 56 years, Joseph G. Dietl on April 10, 2020; her parents Raymond and Agnes; and sister Mary Jo Nordstrand on December 31, 2019.