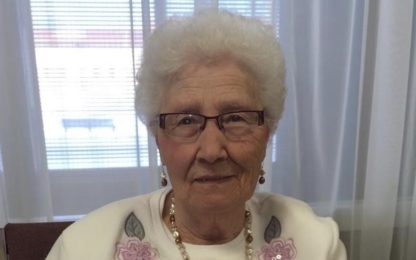 Dorothy Aalderks, age 93, of Renville, died Monday, September 21, 2020, at the RenVilla Nursing Home.  A private family funeral service will be held on Friday, September 25, 2020, at Emden Christian Reformed Church in Renville.  The Rev. Dave Zigterman will officiate. Dorothy’s funeral service will be livestreamed via Emden Christian Reformed Church’s Facebook page. Friends are invited to join the family for a committal service at 9:30 a.m. on Friday at Holland Township Cemetery south of Prinsburg. Friends may also greet the family at a visitation on Thursday, September 23, 2020, from 5-7 p.m. at Emden Christian Reformed Church in Renville.  Masks are encouraged to all who wish to attend.   Arrangements are with Dirks-Blem Funeral Service, Renville, MN.

Dorothy Aalderks was born on January 20, 1927, in Rheiderland Township, Chippewa County to Harry and Marie (Schwitters) Ammermann.  She grew up in the Clara City area and attended country school.  As a young lady, Dorothy worked as a nanny for many years.  She was united in marriage to Richard A. Marcus on January 3, 1946, at Bunde Christian Reformed Church.  They made their home in Prinsburg and began raising their family.  In 1963, Dorothy and Richard moved to Renville and she has resided here since.  Richard passed away on September 10, 1981.  Dorothy was married to John Aalderks on November 1, 1997, and they have enjoyed 22 years together.  She was a member of Emden Christian Reformed Church, and was active in the Ladies Aide, Bible study, and the Mission Society.  Dorothy loved to embroider and make dish towels, baking cookies, and doing ceramics.  She also loved the Minnesota Twins and other sporting events.  She was a loving and caring wife, mother, and grandmother who never missed chance to send a card to her family member’s special day.

She is survived by her husband John, her sons and daughter: Duane (and Lynn) of Litchfield, Bob (and Jill) of Renville, Jim (and Nelida) of Renville, Loren (and Rhonda) of Renville, Verla (and Randy) Zieske of Renville, and Todd (and Brenda) of Prinsburg; her two stepdaughters: Kris (and Kim) Henspeter of Marshall, Gail (and Mike) Aalderks of Sauk Rapids; her special friend from India, Amrita Singh; 15 grandchildren and 30 great grandchildren; her siblings: Marjorie (and Myron) Bonnema of Prinsburg, Willis (and Jolene) Ammermann of Willmar, and Wallace (and Gail) Ammermann of Lake Lillian; many nieces, nephews, and other Relatives and friends.  She was preceded in death by her parents, her husband Richard, her grandsons Mitchell Zieske and Brent Marcus, and her siblings: Richard, Harley, Gordon, Elaine, and Corrine.