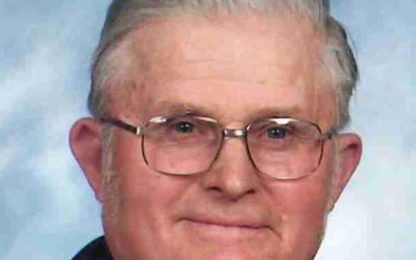 Due to Covid 19 guidelines, private graveside services will be held at Albion Lutheran Cemetery, rural St. James, on Sunday December 13 at 1:00 pm.
Condolences may be left at www.sturmfh.com
Arrangements are with the Sturm Funeral Home in Sleepy Eye.

Donald Wallace Knudson was born October 8, 1932 to Clarence and Frances (Paulson) Knudson at the St. James hospital. He grew up on the family farm near Comfrey and attended District 76 through 8th grade. He graduated from Comfrey High School in 1950. He was baptized, attended Sunday School and was confirmed at Albion Lutheran Church where he was an active participating member. He looked forward to the annual church bazaars and Godahl days helping as needed. He farmed the family farm until 1989 when he retired due to heart issues. Following successful open- heart surgery he remained on the farm where he enjoyed gardening and tending to his acreage. In October of 2015 Don moved to Countryside Apartments in Sleepy Eye and later became a resident of the Senior Care Center on that campus. While residing there he enjoyed the company of other residents and care givers while making new friends. He particularly enjoyed the social activities and programs. Donald was a very social person and had a unique memory and knowledge of all the surrounding area. While driving through the countryside he could tell us not only who lives on the farms today but also who used to live on those farms in past years. He had an amazing ability to visit with anyone who was around him.
Donald is survived by his brother, Douglas and wife Mary, 3 nieces and 5 nephews, their families and numerous other relatives and friends. He was preceded in death by his parents and 2 brothers, Clayton and Roger.