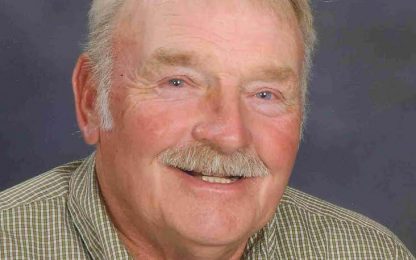 Mass of Christian Burial will be held at the St. Joseph’s Catholic Church on Saturday at 1:00 pm.

The clergy will be Father Garrett Ahlers. Interment will be at the St. Joseph’s Catholic Cemetery, Lamberton, MN.

Dennis “Tony” Riley was born on a farm near Redwood Falls, MN on August 22, 1939 to Sylvester and Ella (Peterson) Riley. The family later moved to rural Wanda where Dennis attended school. On February 13, 1960, Dennis was united in marriage to Rita (Roiger) at St. Thomas Catholic Church in Sanborn. Together they had 4 daughters – Jodi, Judy, Jeanna, and Jackie. The couple farmed near Wanda for 15 years and then moved to Lamberton in 1976. Dennis then worked for Parker and Sons Tiling for 30 years before retiring. He then started Tony’s Construction and spent another 15 years doing what he loved, digging in the dirt. His hobby was collecting old things, mostly old tractors, especially Allis Chalmers. His pride and joy was his D-21. Dennis enjoyed spending time with his 13 grandchildren and 21 great grandchildren.