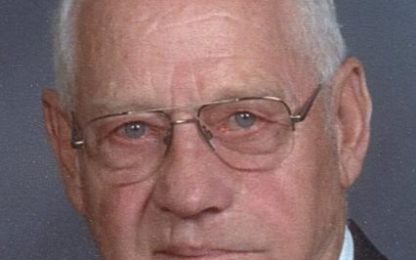 Delton Duehn, age 88, of Hector died on Tuesday, December 1, 2020 at RenVilla Nursing Home in Renville. Private services will be held at a later date with burial in the United Methodist Church of Hope Cemetery in Osceola Township, north of Hector. Arrangements are with Dirks-Blem Funeral Service of Olivia.

Delton Carl Duehn was born on August 13, 1932 on the family farm in Osceola Township, rural Hector, Renville County, MN to Carl Richard and Eva Esther (Heydt) Duehn. He was baptized as an infant and later confirmed at the Evangelical United Brethren Church of Hope in Osceola Township. Delton received his education at District 115 country school 1st through 8th grade and Hector High School 9th – 12th grade, where he graduated in 1950. Delton was an active member of the Osceola Jacks and Jills 4-H Club in which he received Blue Ribbons for swine, had white faced Hereford steers, and competed in One Act Play Competition. In 1951, Delton was recognized for his public speaking ability and given an award by county agent Frank Svoboda for writing and performing a speech. Delton was an FFA member. He had flocks of laying hens and as many as 100 sheep that were judged on progress and efficacy of weight gain. He also had 12-14 sows and farrowed two litters a year each. In 1950, he was the MN State Fair Champion for his Black Poland China boar.

On September 3, 1952, Delton was united in marriage to Barbara Jean Dahl by Rev. Campbell at the Evangelical United Brethren Church in Olivia, MN. Delton and Barbara made their home on the family farm in Osceola Township and the marriage was blessed with five children: LaJean, Joy, David, Timothy, and Theodore. Besides farming he worked for the Osceola Telephone Company for 25 years, maintaining phone service for 25 customers. He sang with the OO Choir, a group of men from the Olivia and Osceola E.U.B. Churches. They sang on the Willmar radio station and travelled to Marshall and various places in the Twin Cities to perform. Delton served on the Osceola Township board for 16 years and as supervisor of the Bird Island Elevator board. The Duehn’s were members of the Osceola E.U.B. Church until its closing. At one time or another Delton held every office in the church. He was a Sunday school teacher and youth counselor along with Barbara. They hosted many youth parties and canoe trips to the BWCA in northern Minnesota with the church youth. “A good time was had by all.”

Delton’s hobbies consisted of fishing and hunting duck, pheasant, and deer. He enjoyed woodworking and made furniture, lamps, bowls, plant stands, candle holders, and more. Delton was a good farmer and truly loved his life on the farm. He was honored to receive a Century Farm Award in 1997. After retiring from farming in 1998, Delton became a volunteer driver for Heartland Express/CCT. He drove as many as 40,000 miles a year; driving as far as Duluth, Fargo, Kellogg, Rochester, and many places in between. He enjoyed meeting many interesting people in those 21 years. In April of 2001, Delton was honored at a banquet at the Minnesota History Center in St. Paul by BCBS of MN for outstanding service. Gold Medal Champion Olympic Swimmer, Tom Malchow, presented the award. It was a true honor. He retired from volunteer driving in 2018. Delton and Barbara loved to travel across the U.S., Canada, Mexico, and the islands of Puerto Rico and Hawaii. He always enjoyed family time – holidays, vacations, hunting, fishing, camping trips, and picnics too numerous to count. Whether it was work or play, time spent with family and friends was always special. Delton and Barbara leave a legacy of strong faith in Jesus as Lord and Savior, hard work, fun leisure time, love and happiness, making memories for the family that will last for many, many years to come.