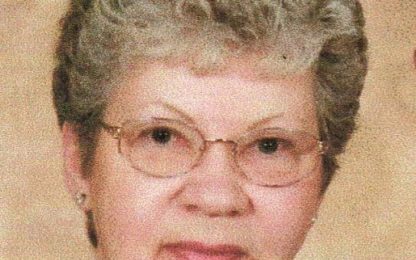 A memorial graveside service for Delores Leonard, 87, of Benson, formerly of Echo and Belview, will take place at 1:00 p.m. on Saturday, July 18, 2020, at the Echo Cemetery.  Out of respect and caution for elderly family members, attendees are asked to please wear masks and respect social distancing.

Delores Mae (Donner) Leonard was born on April 6, 1933, in Belview, to Clarence and Gladys (Harried) Donner.  She grew up in Belview and graduated from Belview High School in 1951.  On October 12, 1951, she was married to Jerome Bernardy in South Dakota.  While Jerome served in the U.S. Army, the family lived in Wisconsin, Colorado, Michigan and Orleans, France.  After his discharge, the couple made their home in Echo.  Jerome died in 1985.  In 1987, Delores married Buddy Leonard at the American Lutheran Church in Echo.  Delores worked as a receptionist for Dr. Hudec, as a Lab Assistant for Dr. Sampson in Benson, as a Secretary at the Echo School and for the Echo Enterprise.  She enjoyed traveling, reading, visiting friends and playing cards.