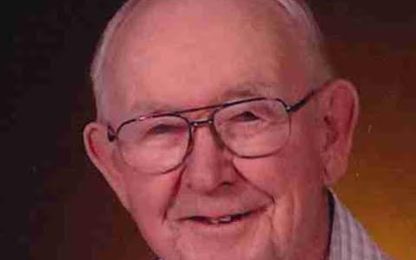 A public Celebration of Life will be planned later Due to COVID-19 concerns.

Interment will be at the St. Mary’s Catholic Cemetery, Sleepy Eye

Military Honors will be provided by the Sleepy Eye Honor Guard.

Chuck Pethren was born to Art and Loraine (Madsen) Pethren on December 28, 1934 in a farmhouse in Brookville Township, Redwood County. A few years later they moved to Sleepy Eye. Loraine and Art’s marriage dissolved and in 1945 Loraine was united in marriage to Clarence (Doc) Windschitl and Chuck and his sister Betty were adopted. Chuck graduated from Sleepy Eye Public High School in 1952. When Chuck was in high school he helped Doc with the City Ice Market delivery and Hauenstein beer business. He furthered his education at IBM School in Minneapolis. Chuck managed the Sleepy Eye Pix Bowling Alley for several years before starting his career with Del Monte for 32 years. He entered the Army Reserves Program in 1957. He spent his active duty in Fort Leonard Wood, MO and received his honorable discharge in 1962. He was united in marriage in 1957 to Dolores Brown at Cathedral in New Ulm by Father Kasel. They were blessed with two children. Chuck was also a member of the Sleepy Eye Volunteer Fire Department for 21 years where he held different positions throughout his time. He was a member of St. Mary’s Catholic Church and Order of Catholic Foresters, Chuck’s faith was very important to him. Chuck and Dolores were married 63 years and spent their retirement years doing some traveling and many summers at In We Go Resort with their RV near the Nevis area where they made many friendships. Chuck truly enjoyed time with his family and friends, hunting, fishing, playing cards with his friends, and gardening. He especially treasured time with his little great-grandchildren, they called him Great Boppa. He is survived by his wife Dolores of 63 years, daughter Debi (Gordy) Pehrson, of Shakopee, and son, Kevin and significant other Julie Nord of New Ulm, two grandchildren, Charlie (Becca) Pehrson and their children Cash and Bella, and Emily (Evan) Lano and their son Jaxson. Brother in-laws Bill (Helen) Brown and Paul Brown of New Ulm. Preceded in death by his parents, Loraine and Clarence Windschitl, Art Pethren, mother and father in-law William and Elizabeth Brown, sister and brother in-law Betty and Martin Seller, nephew Mike Sellner, sister in-law Dorothy Brown and brother in-law Ron Stout, and daughter in-law Sue Windschitl, along with many family and friends. Chuck will be missed and remain in the hearts of many.