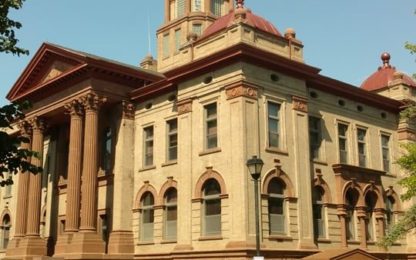 A warrant has been issued for a Mountain Lake man accused of swinging an ax during a confrontation, then leading police on a high-speed chase.

Dallas Dean Rogers, 27, was charged last week in Cottonwood County District Court with three felony counts of assault with a dangerous weapon, and felony fleeing police in a motor vehicle.

According to a criminal complaint, a woman reported to police Jan 18 that her roommate – Rogers – had been angry that morning.  The woman she’d asked two people to come with her to ask Rogers to leave because she was tired of constantly living in fear.

Rogers allegedly charged at the complainant when he was asked to leave.  A struggle ensued on the ground, according to the complaint.  A witness separated Rogers and the woman, but Rogers grabbed an ax and began waving it over his head, the woman told police.

Court documents say Rogers swung the ax into the dining room table with one of the witnesses standing just three feet away.

Police say the witnesses accompanying the complainant corroborated her story.  One witness told police Rogers swung the ax a second time, then began walking towards the witness, which is when they ran and called 911.

The complainant called police while en route to the Mountain Lake Police Department, reporting that Rogers was following her in a Chevy Silverado.  Police followed the pickup and attempted to perform a traffic stop on Co Rd 44.

The pickup instead sped up and led police on a pursuit that reached speeds in excess of 100 mph, according to the complaint.  The pursuit was terminated.

A warrant has been issued for Rogers’ arrest.