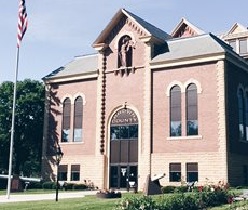 A New Ulm monument maker is facing numerous felony charges after he allegedly scammed his grieving customers, and the previous owner of the business. Jesse Lee Ellerbroek, 43, of Winthrop, is accused of swindling customers through his company, Heritage Memorial and Stone Creation.  A criminal complaint says the business was closed as of April 5, 2020, and Ellerbroeck had left town without delivering headstones or completing stone setting or engraving work.

In many cases, Ellerbroek cashed checks immediately, then ignored customers, according to the complaint.  More than $21,000 in thefts are outlined in court documents.  One of those cases included a woman who purchased a headstone for her deceased son’s grave in November 2019.  The $6,500 check was cashed the following day, but the victim told police she hadn’t heard from the company in months.

In June 2020, detectives executed a warrant at an address on North German St in New Ulm, where several of the missing headstones were located.

The warrant came after an April 2020 incident in which police were called to the same address.  The complainant on that call explained that Ellerbroek had stopped paying on the contract for deed to the previous owner. Investigators learned that the Ellerbroek had never transferred the company vehicle ownership, the tabs were expired, and the truck was uninsured, says the complaint.

The former owner told police that Ellerbroek had texted him in February 2020, saying he planned on “walking away” from the business.  The owner returned to find that the office had been cleaned out, says the complaint. The files, computers, and customer information were all gone, according to the charging document.

Ellerbroek is charged with 13 counts of theft by swindle, nine of them felony charges.  He’s been summoned to appear in Brown County Court.