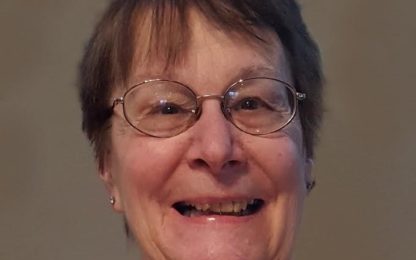 Carol Ann Kriegl, daughter to Louis and Alice (Grebowski) Cahanes, was born November 24, 1943, in St. Paul, Minnesota. Carol was raised on a farm outside of Stillwater, MN.  She graduated from Stillwater High School in 1961.  Carol went on to further her education at Wisconsin State University in River Falls where she earned a Bachelor of Science Degree in 1965.

Carol married Josef A. Kriegl in Bayport, MN, on July 8, 1967. During their married life they lived in Sparta, WI, until 1973, moved to Cedar Grove, WI, until 1976, and settled in Redwood Falls in June of 1976.  Carol worked as a Legal Document Specialist for Farm Credit Services in Redwood Falls for 26 years; retiring on her 65th birthday in 2008.

Carol was a member of St. Catherine’s Catholic Church where she was involved in Council of Catholic Women, Social Concerns Committee Secretary, and a Eucharistic Minister. She was a member of the Newcomers Club, was a great 500 card player, and an avid reader of novels.  Carol also loved crossword puzzles, enjoyed coffee with friends, dancing the polka with Joe, and volunteering at church.  Carol and Joe had many amazing trips traveling the world together. Especially traveling to Switzerland, where Carol has many cousins and Bavaria, Germany, where Josef’s parents immigrated from. Also, through their employers they spent many vacations in the Caribbean Islands and Mexico. Other areas of travel were Turkey and the old Yugoslavia, where Marshall Tito was the President-many interesting memories.

Most of all, Carol loved her family and friends.  Carol instilled lifelong values in her children and grandchildren who will carry on her legacy. She will be dearly missed and live on in our hearts, minds, thoughts, prayers, and laughs forever.

Carol was preceded in death by her parents, Louis and Alice Cahanes; a sister, Pamela Cahanes; parents-in-law Joseph and Elizabeth Kriegl.