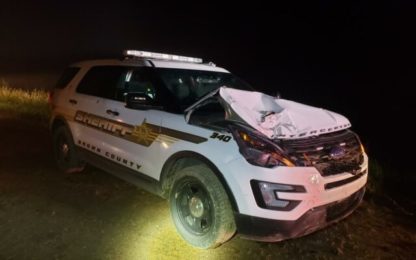 A sheriff’s deputy was injured early Thursday morning when his squad car collided with cattle in rural Brown County. Deputy Justin Bauer, 32, of New Ulm, was northbound on 280th Ave, en route to respond to a suspicious activity call at a farm near Sleepy Eye, when his squad struck the cattle, which were loose in the roadway between Co Rd 22 and 150th St.

The Brown County Sheriff Jason Seidl says Bauer was traveling at about 2:20 a.m. under the post 55 mile per hour speed limit due to fog.  A state patrol crash report also listed road conditions as wet at the time of the crash. Bauer suffered non-life threatening injuries and was transported to New Ulm Medical Center, where he was treated and released.

The 2016 Ford Explorer squad sustained about $13,000 in damages. The cattle were euthanized due to its injuries.