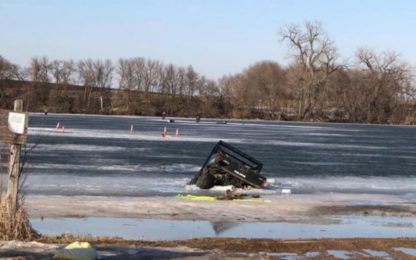 Some things should be obvious, but the Brown County Sheriff’s Facebook post Tuesday showed that common sense isn’t so common anymore.

“Most people are aware, but a few need reminding,” reads the post.  “The water is NOT SAFE to drive on.”

The post was short and sweet, but a picture illustrated the sheriff’s warning beautifully.  “This incident occurred over the weekend on Lake Hanska,” said the caption of a photo that showed a Polaris ATV sinking into the waters of Lake Hanska.

The picture shows obvious signs of snow and ice melt on the lake, so it’s not clear exactly why the ATV occupants sought such a risky endeavor.